The Message Of The Dogs 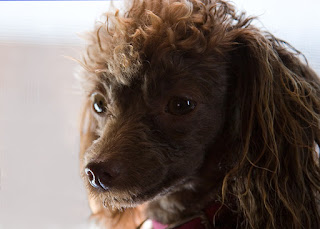 Somewhere there is a dog barking.
When I hold my breath and listen
carefully, I can just hear it,
high pitched, squeaking, urgent.
My dogs hear it,
they understand the message,
they bark it onward,
to the dog next door, who barks
to the dog down the street
who barks to the dog in the next
street, who barks to the dogs
in the next town, who bark it
to the dogs in the big city,
who bark it across the state.
All these dogs barking,
started by a frantic Chihuaua
lonely for her people,
fearing they’ll never return.
The dogs across the state carry it on,
they bark across the rivers,
tell the dogs of the whole continent.
In the Pacific, a dog being walked
down a polished deck
barks
and soon all the dogs on the ship are barking.
No one knows what set them off,
barking to annoy everyone, waken peaceful sleepers,
startle amorous lovers,
distract the crew from their work.
Dogs must bark, for this is an urgent matter,
a Chihuahua’s terror. Soon
all the dogs on all the ships, all the trains, all the planes are barking.
Here at home, my dogs continue,
none of my training can stop them,
the bark is more important than human need
for peace and quiet.
Soon the bark has reached Alaska. The sled dogs,
always barking, change their urgent cry of “let’s run let’s run”
to the tune of “ someone please
comfort cousin Chihuahua.”
Russia’s eleven time zones come alive with barking.
Vladivostok to Petersburg,
Irkutsk to Moscow, Russia’s dogs pass it on,
north to the White Sea,
south to the Black Sea.
Soon, Poland’s dogs are barking,
Germany’s dogs are barking,
France’s dogs sniff and lift their heads,
carefully, decide whether to eat or bark
and yes, they bark. No translation is needed.
Barking is universal, dog emotions are powerful.
Even the wild dogs with their different language
stand up and bay,
the foxes and jackals yip
wolves and coyotes sing.
The bark reaches Easter Island, Tahiti, and
Rangaroa, bark bark, bark bark, roars and squeals and yips
join together, across the earth, dogs are barking
and people are crying “quiet!”, “shut up!”, “shhhhhh”, “No barkies!”
They blow on whistles, snap
clickers, squirt water, shake cans of rocks but the world’s dogs bark.
The whole dog universe
sounds a call that flies with the winds, rises into the clouds to travel
far distances, for one of their kind is distressed and dogs are the most loyal
of creatures.
It is a dog’s duty to bark until the message has circled the world
and the Chihuahua’s people feel a subliminal urge, a stab of worry,
an urge to hurry
home, home, quick unlock the door, Ceecee’s gone crazy
the neighbors are furious (dammit why don’t you teach that dog
some manners). They thought she was trained but they leave her
alone, long and often, they think it doesn’t bother her
they don’t know Ceecee’s terror has gone around the world and
she was invoking the dog power
to bring her people home, and they returned, early,
canceled plans out of vague worry
knowing nothing of the way
the hue and cry of ten billion dogs
was barked across all the time zones of the earth to help
Ceecee bring home the people she loves.
at November 14, 2009