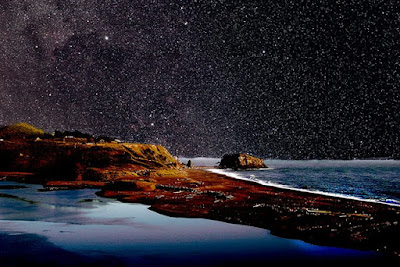 Where am I?
Yes, I know…California, planet earth,
solar system, milky way, local galactic group,
Great Wall Galactic structure, further strings and shapes of galaxies
in structures too big to see, yet, part of a thing
called Universe, and then , then…
where am I? Large or small, or in between?
fractal geometry reveals that size
is meaningless, macro is the same exact shape
as micro, and if that is true,
the “where” of am I could put me at the very center
of….of what? Not too big, not too small, just right?
If our universe “banged” some fourteen billion years ago,
then evolved into the shape we now see,
this universe is temporary, it’s passing on through,
truckin’ down the road. What’s fourteen billion years?
Nothing much. An expanse of time. It’s not Forever.
So where am I? Let’s leave alone the “what am I?” question.
I have a feeling that the Where will reveal the What and the What
will reveal the Where, but man, this thing is complex and subtle.
Wrap your mind around the most brilliant idea EVER thought,
an idea that dwarfs Einstein’s most stunning insight,
an idea that has Steven Hawking playing with wooden blocks
that have letters carved in simple relief, “A”, “B”, “C”,
that’s very good Steven, very good Albert
very good deepest thinkers of our world,
you’ve gotten us off our tricycles,
but we don’t know where we are, don’t know what we are,
and surely don’t know why we are,
so it looks like I’m going to have to keep asking,
I mean doesn’t EVERYBODY ask?
Maybe not everybody but a lot of us would like to know
and we put all these frustrations into books
and call them religions and maybe they soothe the frustration a little
but they don’t put a face on my location in the scheme of things
so I just want to grab this super smart Intelligence, Force, Creator,
Joker, whatever it is, grab it by the collar and say just like a movie tough guy,
“Hey! Where am I? I want some answers! Quit fucking around!
Can’t you show us a formula, an artifact, a document that’s less ambiguous than Koran Bible Torah, send an angel or flying saucer person, or something to change me from frustrated to fulfilled?
Can’t you do that right now, huh?”
Uh oh. I know I’m not as smart as Einstein much less this thing that casually
tosses universes out like a tennis ball machine, bang!
whoops we missed, Bang! There it goes again. Universes all over the place that support life, no, encourage life!
This is not someone you grab by the collar and get tough with, anything could happen. And does. Everything happens!
It makes me kind of tired. My eyelids droop from the effort of all this
ravenous curiosity.
I think I’ll go to sleep. Maybe I’ll find the answer in a dream.
Wouldn’t it be funny if I had that dream,
and then couldn’t remember it?
at February 19, 2010