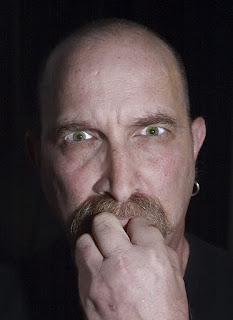 Art Rosch
Copyright 2010
1.I am a genius unique in the annals of mankind.  Most of the reading audience is not advanced enough to perceive the layered depth of my work
2.If my books are published they will change lives.
3. I’m a committed artist.  My work transcends genre. This upsets agents, who are too conventional to see through the boundary-shattering nature of my work.
4.My life experience has been so unusual and difficult that I have a special credibility in writing about the human condition.
5.I’m getting older and all these rejection slips are coming from agents who are my kids’ age.
6.Who do they think they ARE!?
7.While I may not be published in my lifetime, my works will reach the world posthumously.  This is a good thing for the world but doesn’t do shit for me.
8.I frequently succumb to self-pity and apathy but I bounce back with increased defiance.
9.I know the odds against writing a best seller are astronomical.  A series of apparent coincidences will bring my writing before the world.
10.The seven hundred agents who rejected me without reading a single page will write to apologize and ask to represent future projects.
11. Ninety nine percent of the people in the world believe that they belong to the one percent that’s superior to the other ninety nine percent.  I am in the REAL one percent.
at June 06, 2010 No comments: 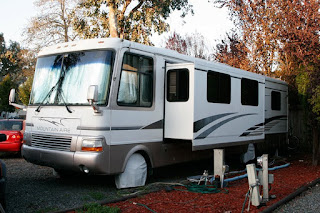 RVs and Life Rafts
June 4, 2010
My wife and I live in a 38 foot recreational vehicle.  It’s a Type A motorcoach, in other words it’s a bus with a bedroom, kitchen, bathroom, everything we need to live comfortably.  It’s also fun.  There’s a “kid-in-a-fort” feeling about living in an RV.  It’s like taking an endless vacation.
Our first RV had taken us to Arches National Park in 2004.  Our campsite neighbors owned a new Type A, and they lived full time in their beautiful coach.  The idea stunned us.
We were getting older, (we still are) and we needed a plan for the next ten or twenty years.  We had “X” amount of money.  We could use it as a perecentage payment on a mortgage.  We lived in notoriously overpriced Marin County.  A cottage with a bedroom would run half a mil, six fifty.  We were renting just such a cottage, and the monthly bite was nearly $2500.  It was insane.
Or we could learn about RVs, buy one for cash and rent a spot in the local campground on a monthly basis.  For $750 a month we could park in a shady place with TV, electricity, water and plumbing.
We would be making a major lifestyle change.  We didn’t know if it would work.  We were accustomed to living in houses.  I had observed, however, that we used about twenty percent of our house.  Our time was spent in the bedroom, where the big TV sat, where our desks and computers lived, where our pets hung out.
There was eighty percent of the house going to waste.
After six months of diligent study and considerable terror, backsliding, mind-changing and procrastination, we bought a used 38 foot Newmar Mountain Aire motorcoach.
It was in Florida.  My dad was in Florida and between dad and the owners’ video camera, we had a pretty clear idea what we were purchasing.
We flew to Fort Lauderdale, picked up the coach and drove it four thousand miles back to the Bay Area.
I wouldn’t want to live in a “stick house” again.  I’m never going back.  The RV is too much fun.
If we had mortgaged a house, we would presently be up a certain creek without a means of propulsion.  By the way, there is an actual place called Shit Creek.  It’s in Ireland.
The experience became my book, AVOIDING THE POTHOLES: ROAD STORIES IN A CHANGING AMERICA.
The world has become psychotic.  It’s getting a way premature oil change (coulda gone another trillion miles, at least).  When the gusher started spewing from the ocean floor, I decided unilaterally that the Age Of Science Fiction had officially begun.  This means that truth has become far stranger than fiction, and no writer (like me, for instance) can possibly invent anything more bizarre than the dystopia now being born in the United States.
Of course I won’t stop writing, but I’m taking myself out of competition with the daily news.
To quote Randi Rhodes:  THIS is the world in which we toil.
at June 04, 2010 1 comment: