THE NEWSROOM and SHAMELESS: Television Triumphs 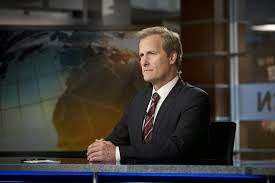 If I were just starting out in the world I would want to write for television.  Hell, I want to write for television NOW!  I think it's the most influential force on the planet.  It may not live up to its potential.  It may betray its potential every day, betray it so badly as to be a force for heinous criminality.  Still, I would love to work in television.  There is world-saving potential in the boob-tube, but it can only be used in drips and drabs.
A TV series is like nothing else in the world of writing.  It's huge.  It provides a set of characters and a plot world that arc across vast swathes of time.  How many years does a successful TV series run?  Three, five, ten?  I've seen enough series to be aware of a quality curve.  The pilot episode and the first season are full of birth pangs.  The cast and crew don't even know if they'll have a second season.  Actors are getting to know their characters, writers are getting to know their actors.
Seasons Three and Four are usually the best.  Then there's a slump as writers and actors get bored, switch out, change tacks, whatever.  If a series gets to Season Six it puts on a fresh coat of make-up and regains the energy necessary to finish out its requisite nine or ten seasons.
We know that THE NEWSROOM will last three seasons.  The HBO execs have told us so.  I can barely imagine any drama so powerful needing much longer to tell its story. 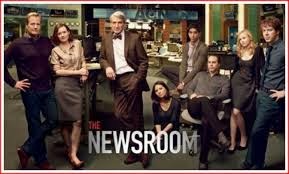 I'm a fan of Aaron Sorkin's writing.  The Newsroom shows Sorkin's evolution as a writer and maker of TV drama.  Some of Season One episodes are so good that they achieve that amazing and rare quality of....of MAJESTY.  That's right.  Majesty.  Goosebumps.
The show's opening titles are a bit long but they convey to us the reverence with which the producers view the tradition of broadcast news.  The iconography is there: Murrow, Cronkite, Huntley, Brinkley, the faces of American television news in an era when news was on at six o'clock every night and it was THE NEWS.  It was not info-tainment.  This tension between the exalted past of journalism and the present tawdry state of...whatever-it-is...drives crucial pieces of the plot.
Jeff Daniels plays news icon Will McAvoy, a monolithic newscaster hewn in the Mt. Rushmore style of the Old School.  He's young enough to be in the Peter Jennings mold, yet crusty enough to harken back to the days of black and white television.  He's a bridge figure: he brings echoes along with him.  He brings the times when The News was honest.  He's an Institution.  He's powerful and widely trusted yet his job hangs from a teeny thread that's held by the Network's owners.  Said owner is Leona Lansing, played by a feisty Jane Fonda.  Her son, Reese Lansing, is the network CEO.  Reese is in bed with Teabaggers, the Koch Brothers, all those crypto-fascists.  He hangs over Will McAvoy like the fabled Sword, and there you have just a fraction of the plot.  Love interest, check, psychotherapy, check, a staff full of college-fresh Millennials, check.  Everything required to build plot tension in a loamy garden of Relevance.  That's all right with me!  Bring on Season Two!  Five Muskrats! 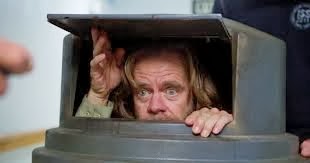 SHAMELESS: Not A Shame At All

The role of Frank Gallagher must have made William H. Macy shout with shameless joy. His character is the ultimate shirker.  He's a sociopathic alcoholic single father of six children.  They  range in age from toddler to twenty-something.  He could care less.  Frank cares only about booze and cooze.  Frank never knows where he will wake up from a night's carouse.  As often as not, he regains consciousness in a dumpster.  It's a miracle Frank never freezes to death on the streets of Chicago's South Side.  He seems to have one of those special angels assigned to feckless drunkards, the angels that see to it that lushes emerge from head-on collisions without a scratch, that they are one step ahead of the piano that crashes onto the sidewalk.  That kind of angel.  Frank nurses a spark of amoral opportunism; he may sit at the bar, fully addled with booze, but his wits light up when some fool blurts that he's just come into money.  Frank slides his stool over.  Frank survives.
I hate Frank.  This is wonderful because a good villain drives a drama like nothing else.  He's a malignant narcissist.  Underneath all the sloppy booze behavior he's cunning and articulate.  He's left all his motherless children in the care of oldest daughter Fiona.  It's Fiona who has dedicated her life to packing school lunches, getting kids to band practice on time, to being a de facto mother of six at twenty two.  Fiona is desperately trying to keep the kids out of The System, heroically striving to give them foundations of stability.  Fiona is one big sacrifice.  Her only indulgence is to have a boyfriend.  These boyfriends have been historically abysmal, so when Steve shows up he seems too good to be true.  He is, of course, too good to be true but it takes a while to unravel his riddle.
Every character in this drama is finely drawn.  Every casting choice is sublime.  Oldest son "Lip" (for Philip), is graduating high school with a 4.6 grade point average.  He has no plans for college.  His counselors, his siblings and his teachers gnash their teeth over Lip's lack of ambition.  He's being offered full scholarships to MIT, Harvard and Columbia.  His girlfriend secretly filled out college applications because Lip has no ambition and regards personal achievement as a game for suckers.  Lip sees a world on the brink of collapse.  Why waste all that effort getting degrees when they're going to be useless?
The striking thing about the Gallagher children is their loyalty to one another.  Each carries his or her weight.  They have one another's backs.
Their feelings about their father are complex. The younger ones tend to adore him.  Nine year old Carl is Frank's disciple, taking lessons in larceny.  Eleven year old Debbie thinks she's "daddy's girl" until one day she learns the hard way that daddy doesn't give a fuck about her, that "Daddy's Girl" is a bottle of Scotch. Fifteen year old Ian is gay and has relationships with both an older rich man and a thug who pretends to be homophobic.  Everything about the Gallagher family is complicated because that's what life is: complicated.  Every solved problem begets two new and more serious problems.  Most of the problems devolve upon Frank's escapades, cons, thefts and maybe even an inadvertent killing or two.  We know that he buried Aunt Edna in the yard so he could keep collecting her Social Security checks.  Frank leaves craters with every step he takes. 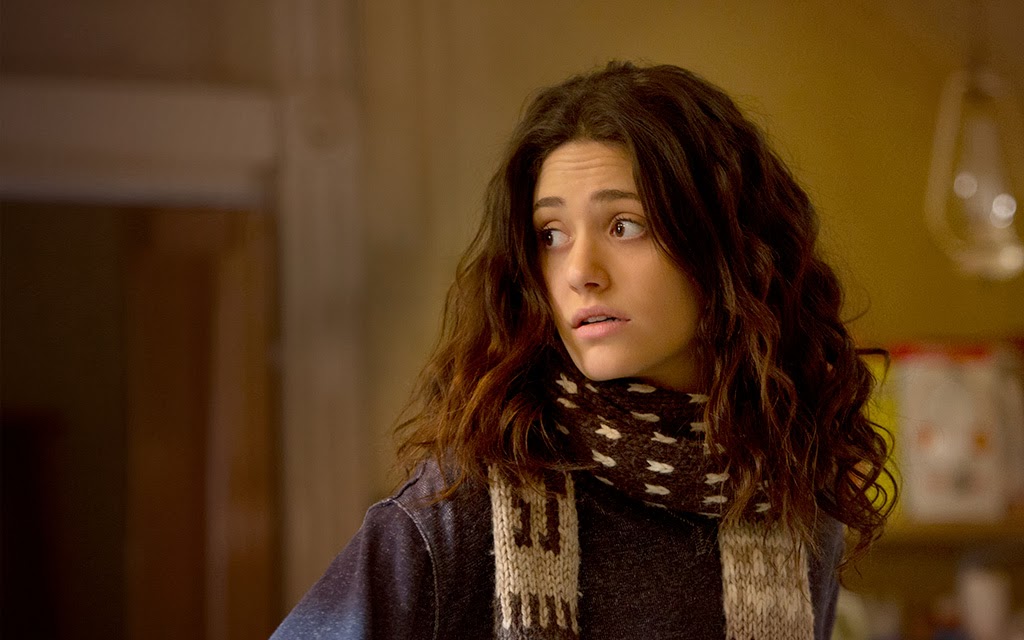 SHAMELESS is real life writ large.  Dysfunction exists in the air, it is a basic component of modern oxygen and there's no escaping it.  Frank Gallagher stumbles around and through the maze of existence as if with night vision goggles.  He can see in the dark because he's the one who made the dark.  He's the perfect role for William Macy.  He's filthy, his hair is matted, his clothes are rotting, he hasn't shaved in weeks.  He should NOT have such a perfect set of teeth but I think the producers weaseled out of that choice.  It would have made Frank unbearable, a visual trial more awful than he would have been worth.
A special award, an EmmyGlobeOscar, toEmmy Rossum as Fiona.  She plays this character with strength and vulnerability.  Fiona is enduring stress and carrying responsibilities that would break a lesser spirit.  Her eyes show a desperate clinging to what's left of her will.  She's "this far" from the edge, one more straw on her back will overwhelm her. She's sexy but exhausted.  She has the look of a woman who, unless she catches a break,  will age with terrifying speed after thirty.
The cast is a brilliant ensemble.  The series shows the love and joy with which it is being made by the production company.