From Playboy Magazine: Sex And The Triple Znar-Fichi 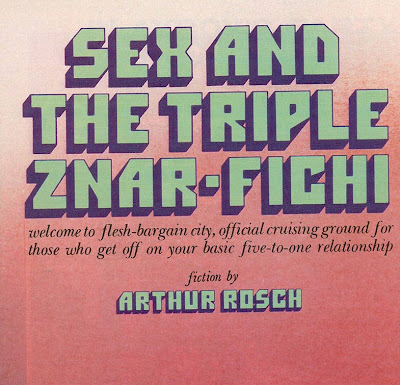 Copyright law prevents me from doing a straight scan of this story, so I've cut and pasted some of the graphics and re-typed the text.  This appeared in the Fall issue of Playboy (let us say it's been a few years, shall we?).  It won Best Story Of the Year Award.

Sitting indolently in his gravity couch, Nerl Forfeech was drooling over this month’s Plaything centerfold.  The shiny cellulose pages fell all the way to the floor, because on the planet Znar-foot there are six genders, and the photograph included all the erotic subtypes.
In this issue, as always, a gorgeous nude Six sprawled in the typically
suggestive pile, gravity being so low on Znar-foot that any other arrangement would have resulted in the lovers floating away.  Their faces were lit with the ecstasy of romantic communion, their organs photographed in a teasing way to be almost, but not quite, visible.  Nerl, idly fondling one of his protuberances, sighed as he viewed the tinted nipples, the arousing half-glimpses of fur-covered apertures.
Then, suddenly, the door-iris swooshed open and Cloong walked in.  Nerl hastily stuffed the segments back into the magazine.  He almost fell from the couch as he attempted to hide the issue under some cushions.
Cloong giggled at her embarrassed partial lover.  “Oh, go ahead, “ she piped.  “I know what you're looking at.  I don’t care.  They ARE rather lovely... but so impossible, don’t you think?”
Nerl threw down the magazine in disgust.  “I wish you weren’t so right. I’ve had only two Sixes in my entire life, and both of them got weird right away... right after....”
His voice trailed off at the memory of it.  The ecstasy!  And then, inevitably, confusion.
Cloong took Nerl by the trunk nooks, and they clung together in mutual  frustration.  Cloong was Nerl’s Two.  And together they had a tentative Three with Albolon Farfing, who, unfortunately, was doing a loose sort of thing with a Two, Three and Four down in the Freesex District in the city of Fichi Forfoot.   Albolon had a tendency to be unreliable, but still they loved him, if a bit reservedly, in return.
“What do you want to do tonight?” Cloong asked, licking Nerl’s eyeknobs playfully.  To Nerl it only made the craving for someone to be inserting into his side slits more powerful.   Cloong was only a quasi-fem, good for sucking and the like....but he shouldn’t be too unfair to her.  After all, he was only a quasi-him.  His abilities were also limited.  Like it or not, it was the way nature made them.  With dozens of erogenous zones, the Znar-fichi needed flesh on all sides, working in combination to produce the orgasmic culmination of multiple personalities.  You could get off with Three; Four and Five were even better.  But being a Six was the only way to achieve the ultimate OMYGOD-gasm.
“What can we do?” Nerl echoed distractedly.  “Is there anything we can actually do to remedy this feeling?”
“Sure,” Cloong cheerfully volunteered.  “We can go pick up Albolon and cruise a Triples Bar.  You never know what might happen.”
“Not again,” Nerl groaned.  “I can’t take it, the futile games, the flash and glitter.  I’m not a complicated person.  All I need is a good, simple five-to-one relationship.  That’s not so much to ask.”
“Come on, “ urged Cloong, lifting her appendagtes in his trunk nooks. 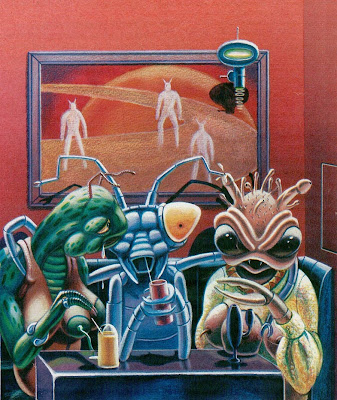 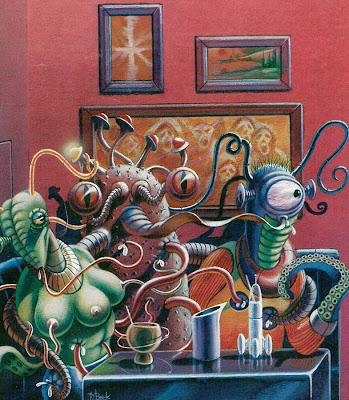 “No, no,” said Nerl, “we’re not jealous of them, Albolon.  It’s just that sometimes your crude come-on ruins our chances.”
Albolon backed away petulantly.  “You’re just possessive, that’s what.  Just because I have my own style and like to check out things on my own.”
He turned, broke away from them, while they stood there, stunned.  All around, Threes were watching them and giggling.
“And you know,” Albolon said stingingly, “I do get off on my other Trip. At least my Snort Beach floozy gives me plenty of space.  Not only that, but they give better trunk, too.”
“Albolon, you’re crazy,” protested Cloong.
“You see,” he said, his eye nooks wide, “that’s what you really think of me when I’m being honest.  Well, we're finished! Goodbye.”
He pivoted and was lost in the whirling bodies.  Cloong and Nerl tried to catch him, but the door of the club hissed and shut and Albolon was gone.
Shocked, under the mortifying gaze of  twittering Threes, they left the club.  Outside, the street was empty of Albolon.
With tears rolling down their face-folds, they made their way across the livid avenue, but the lights and gaiety had lost their charm.
“Let’s go home, Nerl,” Cloong said mournfully.  “This is no way to find your nice, simple five to one relationship.”
Nerl stood stubbornly in one spot. “Go home?  You must be kidding!  We just lost our Three.  I don’t want to go home alone tonight.  I’m just not ready for it.”
“You’re NOT alone,” said Cloong, a trifle peeved.
“You know what I mean,” said Nerl, regretting his spite.
“I guess I do,” she said, fatalistically.
Nerl gazed up into the dimly visible heavens, reddish in the glow of the street lights.  All his anguish at the way they had been constructed poured out of his heart and flailed weakly against the indifference of the cosmos.
“There are are some worlds out there,” he said distantly, “where I’ll bet they have only three genders, or maybe even just two.  Different arrangements entirely.”
Cloong laughed and took his center trunk with her snout.  “Come on, Nerl.  That’s absurd.  Think how dull life would be.  It would all be so simple!  TOO simple.”
He shook his shaggy mane, as if to dispel the far-flung fantasy.  Taking his partial girlfriend  by one of her more exposed tubes, he led her down the hysterical walkways in search of a Four-Two club.