Superman On Prozac...Chapter One excerpt

I've written about a third of a novel of this re-visioning of the Superman Myth. Of course there are copyright infringements. I would have to be hired by Superman's owners, or simply sell the idea and be a consultant.  Any time, Super People! 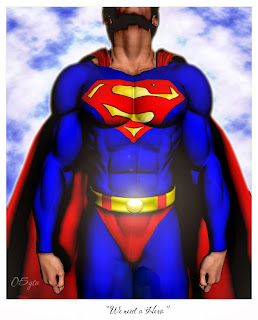 “There’s so much to be done,”  he thought desperately.  “So much to be done.”
Then, as always, aware of his mental processes, he stopped thinking and hurled  his psyche a billion light years into space.  From that distance, he looked down upon the infinitesimal speck of this person, this unfortunate hero the Earthlings called Superman, Kal-el, son of Jor-el.
This thought, he realized, was his nemesis:  There’s so much to be done.  In those five
words huddled a universe of misplaced responsibility, guilt, neurotic over-achievement.
He had that insight for a few seconds, then his distance collapsed, his detachment gave way to
a sucking rubber-band sound, thwangggg! and he was pulled back into his personality.
“Who am I kidding?” he asked himself.  “I’m the only person who stands between these earthlings and utter self destruction.  I can’t afford the luxury of neurosis.  I am doomed to be a workaholic because the alternative is to be uncaring, unfeeling, and to let these people fight each other to extinction.”
He had altered the political structure of the planet Earth until its stability depended upon
his intervention.  He kept the peace by what he called “The Balance of Astonishment”.  Or, sometimes, “Mutually Assured Incompetence.”
Kal-el found a can of chunky pineapples in his kitchen cabinet, and a container of cottage
cheese out back in a tin box.  The wind drove particles of stinging ice into his face, but he didn’t
feel it.  Pain was, for him, a voluntary experience.
His computer chair was a drummer’s stool, a collapsible Gibraltar Power Throne.
He sat in front of his monitor, moved his wireless mouse with a nudge of his forefinger.
Eating with deliberate slowness, he watched the monitor come to life.  Between bites, he brought
up his email program.  It was server-automated, and software sifted the messages for code words
and phrases of things he thought might need his immediate attention.  At the bottom corner of
his Outlook Express in the left hand box, the program said, “You have 17,596 unread messages.”
About average.  Down in the bunker complex, a dozen of his clones answered email,
another hundred thousand messages a day.  Automatically sifted out were the “Dear Superman,
can you get my neighbor to drop dead” messages.  Emails from civic leaders, volunteer coordinators, educators, local politicians, national politicians, tribal chieftains, individuals who fit the profile of true need, those were the emails he answered and responded to with the appropriate action.