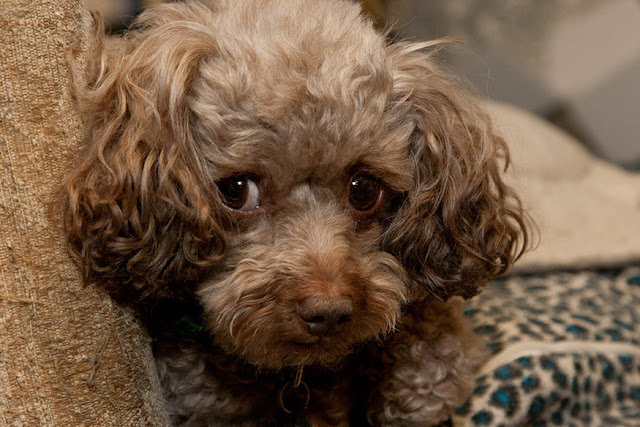 My dog barks.  All seven pounds of Bear the Poodle barks at any dog he can see through the screen door.  His barking has been driving us crazy, but lately there's been a real improvement in this behavior.  When he was younger he would bark relentlessly until the passing dog went beyond his boundary limit. Bear is a fierce and loyal guard dog.
Bear's bark isn't so much shrill as it is explosive.  In his first year he would bark when we were deeply asleep.  He would bark  when a dog entered his zone-of-protection, which began at the house on the left  past the house on the right.  Or vice versa.  This bark would send us flying from the bed, sheets and blankets scattering.  "Wha..what...what?  What the hell?!!!".
It took a few moments for us to collect our wits and in those few moments the temptation to drop kick Bear across the room was very powerful.  But we are not
dog drop-kickers.  We are not rolled up magazine hitters, nor are we stick-their-nose-in-their-booboos-and-snarl-BAD DOG BAD DOG! people.
We are not electronic-shock-collar-users, we are not lock-him-in-a-box or exile-him-to-the-garage type people.
We're civilized.  We found that the best thing to do was to say "OW! THAT HURTS!"
or "YOU WOKE US UP!" because that's what is real, the blasted bark is like an ice pick into my ear drum.  It really hurts!
Bear understands emotions, and he quickly understood this one, so his night time barking diminished to virtually nil, as did his day time screen door barking.  He does, occasionally, slip up.  In our neighborhood there lives a dog that is a mix of mastiff and pit bull.  The monster weights a hundred forty pounds.  When this Godzilla of brindled canine testosterone drags his master past our residence, Bear charges the screen door and lets out a single mighty "ROOOOFF!".
Then he looks at us, a bit shame-faced, and we know that he's dying to do it again, just once, at least once more, but it would hurt his people and he doesn't want to hurt his most beloved humans.
To stifle this impulse, he goes to the kitty's food dish and takes out a single piece of kibble and either eats it or pretends to eat it and drops it down the heating vent when we're not looking .  Then he returns to his spot and settles down.
He does it every time.  He does it when he makes that penetrating detonation of a bark at the screen door.  He does it whether it's a passing monster or a sweet little Bichon or the prancing Pomerianian that is, in his opinion, a stuck up little asshole.  He looks an apology at us, he pushes his next bark back inside his wolf-like soul and he eats a piece of kitty kibble.  Or he hides it somewhere until we can't see him and he drops it down the vent.
This is pure sublimation.  This is emotional sensitivity of a high order, and neurosis of classic Freudian nomenclature.  Our seven pound poodle, Bear, has learned to sublimate his atavistic impulse, the better to exist in society among people
he loves.
Tell me, then, how deep is an animal's emotional life, how subtle are the registrations of empathy and love?
We hate that brindled mastiff, and we hate his owner even more, the asshole, strutting down the street with a hundred forty pound killing machine on a leash.  He looks like Reinhard Heydrich before the Czech Resistance blew him out of his armored Mercedes.
The owner doesn't bother to clean up the dog's shit.  He leaves it steaming wherever it falls, huge as an elephant turd but without the earthy odor of grass and leaves.  It smells like bowel-processed Pedigree Lamb Cuisine, and believe me, that stuff stinks bad enough before it is turned into shit.
So, if I could, I would give Bear a "get out of jail" card for barking at this particular combo but Bear would get a little confused if we took things to that level of detail.
He's a dog, for god's sake.
at July 17, 2012 3 comments: