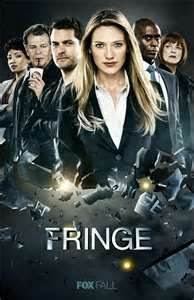 FRINGE is not brilliantly written but its actors compensate us with performances that turn the series into a drama that is greater than the sum of its parts.  Few such dramas can survive the leaden hands of less gifted writers, but the series somehow acquires fresh infusions of blood (uh...uh....) as it progresses.  By the time Season Four rolls around, I have the feeling that all the improvisations are finally gelling into a real story arc and that a few "high fives" are being shared around the writer's table.
"We got there!" they congratulate themselves.  "We know what FRINGE is about!  Now we'd better pull our shit together before we start to grow boring, tiresome, repetitious and trite."
They have, after all, been flirting with these show-stoppers since the pilot episode and have just narrowly missed the bullet with each new season.
Addendum: We have now seen all of Season Four and unfortunately
my prediction has come true.  Aside from a couple of decent episodes, the series was puerile, the writing lazy, the plots derivative.  I understand that Season Five only recently ended its network broadcast.  If they had cut the cord at the end of Season Three they would have escaped with their dignity intact.  Alas, television production is subject to pressures of which we have no idea.  I can only say that my wife and I have a new slang term: we've been Fringed.  This is not a good experience, being Fringed.  It leaves one with the taste of stale hyperbole, like two day old coffee that's been endlessly re-heated in the office coffee urn.
at January 17, 2013 2 comments: