Query letter for CONFESSIONS OF AN HONEST MAN 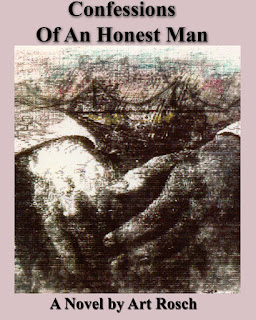 I've written hundreds of versions of a query letter for this novel.  Hundreds.  The ones that I've sent haven't worked for me.  I know that I'm trying to promote a project that isn't much in demand these days:
a literary novel.  About ten years ago I had a prominent editor offer his help free of charge.  He thought the writing was audacious and fresh.  We weren't a good match as editor/writer.  The relationship turned strange.
This latest query letter is, I know, a bit too long.  But I think it's pretty good.  What do you think?  Really.
Help me out, fellow writers.

The literary turf of my novel, CONFESSIONS OF AN HONEST MAN,
is similar to that of Jonathon Franzen, Dave Eggars and Richard Lethem.  It's about fifty years in the lives of members of a midwestern Jewish family.  The major focus of the story is the war between mother Esther Kantro, and her son Aaron.
When Aaron is nine years old his talent for music is discovered by an influential concert soloist.  Aaron is offered a precious scholarship.  Esther tries to squash this opening, tries to flatten her son in all his aspirations.  We don't yet know why this is so.
Aaron wins the scholarship but sidesteps the ambitions that other people have for him.  Aaron learns about jazz from his fourth grade teacher.   Aaron's passion is ignited and he is consumed by jazz for much of the book.  He finds his apprenticeship with a successful musician named Zoot Prestige.  It is Zoot who provides Aaron with a mentor and spiritual guide.  Zoot is a sly wit, a very tricky cat.
CONFESSIONS OF AN HONEST MAN, at 125,000 words, is divided roughly into three segments.  There is the world of jazz.  There is the world of 60s high school in a Jewish suburb.  And there is the world of Afghanistan, in 1982 and 1996.  In Afghanistan Aaron finds the inner resources to confront his demons.

My writing career began with a sale to Playboy Magazine.  My short sci fi humor piece was represented by Scott Meredith.  The story won Playboy's Best Story Award.   My budding career was unfortunately interrupted by a long illness.  I returned to active writing in 2000.  Editor Barry Malzberg offered his assistance with CONFESSIONS after Mr. Meredith's death.  I've since written and published as a photographer for Shutterbug Magazine (six articles, two magazine covers), eDigital Photo, and The United Nations Environmental Photography Exhibit.  I've shown literary pieces in Exquisite Corpse, Species Link, and Truckin.'
CONFESSIONS OF AN HONEST MAN is a book that will have a special draw for baby boomers.  It deals with adolescent life in the 60's and includes cameo appearances by Jimi Hendrix and Jim Morrison.  If you are interested, I would be glad to send my material.