The Real And The Absurd in Big Pharm Marketing 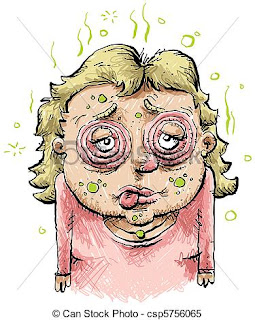 Wait a minute.  Am I really seeing this?  I'm at the gym, pedaling away furiously on the recumbent bicycle and my headphone jack is plugged in to the television.  There's a commercial.  There's Kevin Nealon, an alum of Saturday Night Live.  There's Arnold Palmer, who needs to introduction.  There's a handsome young race car driver dressed in his jump suit.  And there's a ten foot tall basketball star.  They are driving in two golf carts, side by side.  Kevin says, "You know,  with Xebelta I didn't even need a blood test. With other blood thinners I need a doctor's appointment."
Arnold, in the other cart, responds, "I love the convenience of Xebelta."
The ten foot tall basketball star says, "Xebelta gives results without waiting."
Race car driver replies, "And there's fewer side effects with Xebelta!"
Kevin gives Arnold a High Five and the two golf carts drive off into the sunset.
Then there's a lot of fine print at the bottom of the screen and a fast-talking voice says,"Xebelta has been known to cause liver damage, double vision, really stinky farts, plummeting blood pressure, hallucinations of Nazi skulls and dried tear ducts.  If you begin seeing crimson giraffes, call your doctor.  If you die suddenly try to call Nine One One before you hit the floor."
I DID see that commercial.  I have not been taking Xebelta.  I think there's something wrong with the world.  Does Arnold Palmer need the money?  Maybe Kevin does, maybe he's got a raging coke habit or six greedy ex-wives, but I don't think the Nascar guy or the ten foot tall guy need money bad enough to appear in a commercial for a possibly lethal blood thinner.
I have noticed an increase in commercials for pharmaceutical products, most of which may apply to an aging demographic. The increase is not slow, it's headlong and aggressive, with new marketing hitting the media almost daily.  There's an insidious message underlying all these new medications: we are sick.  We are getting sicker.  We need a lot of medication.  We need to be ever more vigilant for heart disease, cancer, stroke, hypoglycemia, diabetes, Gout, Porfiria and Recalcitrant Plebny.  Not only are we getting sicker but there are new diseases appearing, new diseases that need new medicines with which to fill the pockets of the Big Pharm industry.  Crohn's Disease is a favorite.  We've all heard of Crohn's Disease.  But what the F is Purple Flamyglitis?  What is Filinson's Syndrome?  Did these disorders appear out of the ethers? Did they migrate across the oceans from Asia and Africa?
I'm a little upset because I don't like subliminal marketing even when it's perfectly liminal.  The PRODUCT is in front of us, it's in the advertisement. The IMPLICATION works more subliminally, the constant elbowing in the guts with the concept that WE ARE SICK AND GETTING SICKER ALL THE TIME.
I DO NOT LIKE THAT!
Shame on you, Kevin Nealon. Shame!  You're supposed to be a comedian, not a pimp for Xebelto.