A Review of THE GODS OF THE GIFT 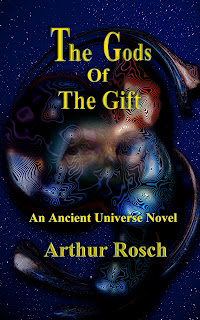 
"The Gods of the Gift is a space adventure reminiscent of Gilgamesh, the legend of Atlantis, and Bilbo’s journey combined into a universal odyssey of epic proportions.  From the planet/person of Calakadon who inadvertently barks like a seal, to the Vizmit the futufu drug lord, to the flatulent language of the inhabitants of the planet Shoms, to Kringmar the fallen Dzujhdu who hangs out in his skull, it’s a wild ride which you’ll be tempted to binge and gorge yourself on, but it may be better digested in small, but frequent doses with time to process and savor, providing you can wait to see what happens next. No matter how you read it, you’ll be wearing a smile that will grow larger as you spend more time with Rosch’s crazy characters and their wacky antics.
Arthur Rosch is a masterful storyteller crafting his tale, which rivals the epic legends of old, along the lines of great storytelling traditions. The omniscient POV can be difficult to pull off, but Rosch does it with skill and eloquence, with only the occasional head hop. Garuvel, the story’s protagonist, takes us on a hero’s journey to the farthest reaches of the universe and our imaginations in search of the planet Wayuzo. Rosch’s world building lies in the tradition of Tolkien, creating unique languages, rituals and customs for the inhabitants. He uses his uses his own descriptive powers with language to paint visual images which are clear and defined. His memorable and unique characters are bold and unusual, with odd habits and mannerisms, and deftly described appearances emblazened upon readers’ minds.
The Gods of the Gift keeps readers entertained for days on end. A masterfully crafted story, which brings us into strange and unexplored worlds where anything can happen. I give it five quills."