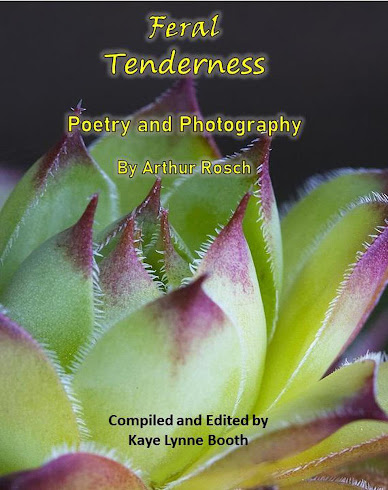 This book, Feral Tenderness, is the fulfillment of a dream.  This volume has both poems and photographs. It unites two of my four creative media into a single opus.  You may ask, (please) “What are your other two media”?  I dabble, (I say modestly) in music and dance.

One night in 2002, I was performing at a venue near my home.  I was reading poetry and playing drums.  The drums were to accompany another poet who enjoyed my mallet work, the throb of tribal call and response.  Two of my thick black notebooks of poetry lay at the lip of the stage.  When I finished playing the drums, I looked for my books and they were gone.  Gone!  My poetry books.  I had noticed a tall shaggy man looming around the stage and I knew that he had stolen my poetry.  The books were full of my handwritten notes and poems.  I had no copies.

Why would he do that?  Was he a representative of the devil?  I don’t believe in the devil.  I believe in evil, that it must be necessary for evil to exist or we would never learn anything.

In all the years since that night I have pined for those black-bound books, missing my poems like absent friends.  I don’t remember the poems I’ve lost. The only remedy for those missing poems is to write new poems.

I never decide to write a poem. It’s more like a meteor striking from space.  When a poem arrives in my mind it is an event.  It happens in the form of a line or two that I can take to the computer and flesh out.  I might indulge in the conceit that I’m channeling some force, some creative hormone that peers out from behind the curtain of life and drops hints to me.  That’s how my poetry works.  One minute I’m sitting on the crapper and a few words come to my mind and I recognize this impulse.  A poem is being born.  Five minutes later I have a new poem.  Not on the crapper, of course.  I’ve risen from my throne and rushed to my computer where I put down the new lines.Sometimes there’s such urgency to write that I run with my jammy pants around my ankles.  Truly.  In the next days I revise a bit, but the poems are mostly formed right out of the starting gate.

Watching a poem take shape is like seeing a fast-motion video of a plant growing.  First there’s a nub rising out of the earth.  That nub quickly grows and shafts of green matter reach from its central pillar, pushing ever up and out, writhing towards the sun.  It’s a little  creepy, watching the otherwise invisible motion of organic matter living in an alien time frame. We don’t see trees grow or corn ripen.  It happens beneath our layer of cognition.

I can speculate that the poems are already in my mind, they have existed since the beginning of time.  The poems came before me and will continue when I’m gone.

Perhaps that’s why I feel such a kinship with the 12th Century poet, Jelalludin Rumi. His poems sound modern, his concerns reach into my core and go with me everywhere.

One of my favorite Rumi lines is this: “Don’t worry about what doesn’t come.  By not coming it prevents disaster.” I’ve spent my life worrying about the absence of an audience for my protean work.  Why am I so completely obscure?  Is it because my work is not good?

I don’t think so.  I’ve been tasked with carrying an unshakeable belief in myself.  It’s not easy to maintain.  My life has been notably inglorious. I’ve learned that great art seldom comes from great human beings.

Plenty of people have borne delusions of superior talent, have called themselves Genius.  It’s a meaningless word that only exists for the purposes of ego. A zillion mediocre artists haunt the landscape of our world, vying for attention.  What makes me different?

I ask you to regard this work, these poems and images.  You will see that I am what I think I am.  You may also note that I haven’t told you what I think I am. Take care, what you think of yourself. It will form you in ways you can’t anticipate.  If fame and glory fail to arrive according to your timetable, think of the plants growing, writhing, eerie when viewed in high-speed video.  Take care to be both honest and superb.  That is the core message of Feral Tenderness.  Stay wild but stay gentle.