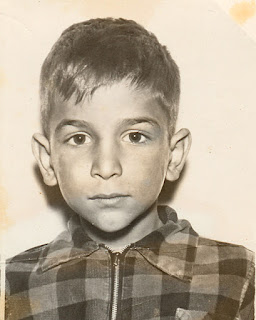 This frightened child is me at the age of five.
I may have been practicing the Vulcan Mind Meld.


Writing and The Magic Curtain
Art Rosch
Aug 31, 2010
One of the strange things about writing is the way I regard pieces of my work as brilliant until a couple of days, months, or even years later.  Then, The Magic Curtain goes up in my mind and I see that the writing is not brilliant.  It may have potential, it may be utter crap but it isn’t the masterwork I once thought it to be.
Every writer knows what I’m talking about.  It’s a bit like trying to eat soup on a trampoline.  The very surface of our work is unsteady and keeps moving.
I KNOW that certain pieces of my work are brilliant.  But….what if that curtain goes up?  How can I ever tell?  My books haven’t been published yet, so there’s no external applause meter to guide me in the nature of audience response.  The meter itself can be unreliable.  Getting published doesn’t mean anything except that someone sees dollars signs behind the work’s title.
It’s taken me a long time to learn how to write.  I have work that I can rely on to be good.  I have work that I trust.  I have a gut feeling about certain poems, scenes, chapters or essays.  Can I trust my gut?  I have to.  Even though my gut has been wrong in the sense that the work I trusted wasn’t as good as I thought.  It wasn’t awful.  It was provisional; it was in progress.  I needed time to revise the work so that it reached the level I sought.
I’ve been writing an autobiographical novel for thirty five years.  It’s current title is CONFESSIONS OF AN HONEST MAN.  I might point out the obvious truth that an autobiographical novel requires some age, it needs some bio about which to be auto.  Now that I’ve passed the sixtieth year of my life, I feel like I can view my story in a different light.  The truth about my life is that I’ve had to be broken before I could be repaired.
I had an agent back in the late seventies, a big-time agent.  He took my books seriously.  I had two books at the time: CONFESSIONS and a sci-fi epic called THE GODS OF THE GIFT.  The agency assigned an editor to work with me.  I had expense account trips to New York.  It was very exciting.  I felt as though I was just on the verge of huge success.  The publishing industry expected big things from me.  I had sold a story to Playboy, a comic sci-fi story that won Playboy’s Best Story Award for 1978.  Every door was open to me.  The fact is that I was like an unripe mango.  Had I been plucked from my tree in 1980, I would have been spit back with a wince and a curse.
I was invited to Playboy’s 25th anniversary party.  This was a gathering of movers and shakers in the world of writing and the arts.  I collected a pocket full of cards from people like Philip Roth and the bosses of Random House and Doubleday.
If I had sold those books thirty five years ago, I would not now have the books that have been my teachers and companions in the art of writing.  My Magic Curtain needed to rise hundreds of times before I could write mature novels.  I had to experience that rush of insight that said, “This writing isn’t as good as you thought it was.  Time to do some revision.”
I expect that The Magic Curtain will always be an integral part of my writing life.
Sooner or later I will have readers.  I owe it to those readers to produce writing of the highest standard.  I may not be David Foster Wallace or Don DeLillo.  I am myself, and I write the stories that I am permitted to write.  I will never be formulaic, I will never treat my audience with contempt.   I always hear the rustling of The Magic Curtain, telling me to be careful and to stay humble.
at September 02, 2010