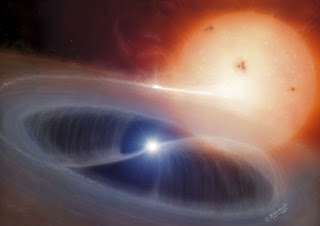 So Far As We Know
October 9, 2010
So Far As We Know….
God made at least one universe containing half a trillion galaxies,
each of which averages a hundred billion stars, many of which
have planets, rocky or otherwise, moons by the boatload,
stars that explode in a dazzle of colors to make hourglass-shapes
way out in deep deep space.
God made creatures innumerable, in detail unimaginable,with gills, lungs,
and membranes osmotic, living under water, on land, in methane clouds,
alone and in crowds.
God made the curve of a woman’s legs, stretching in sunset light,
god made the bulge of man’s shoulders, flexing in the hot summer night,
god made photons and quarks, black holes with sparks, god made such majesty!
It stuns the senses, knocks us to our knees with awe, prostrates us with ecstatic grief,
oh god, oh god!  oh God!
So far as we know…
God does not talk to pasty faced self righteous white boys
with radio shows, or personally instruct politicians in cowboy hats,
or reveal divine plans to fag-hating old men from Kansas.
So far as we know…
at October 09, 2010