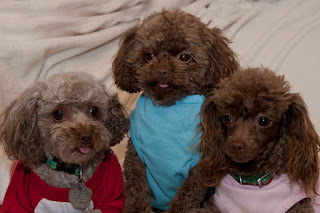 In my efforts to remain the world's most obscure talented writer, I have enlisted the help of my household animal friends. I've told the story of Little Bear's rescue from the puppy mill. http://www.artrosch.com/2010/09/bathing-dog-who-bites-even-though-i.html

I've told of my encounter with General Stonewall Jackson Cichlid. http://www.artrosch.com/2010/11/interview-by-fish.html
I'd like to introduce the other members of the book circle and give a thumbnail description of each of my friends-slash-literary critics..

Little Bear is certainly the leading intellect of the group. He is willful, stubborn and sometimes hard to motivate. He learns dog tricks as if they're beneath his dignity (which they are) but in order to please us he sits, shakes hands and rolls over.

Bear is the most loyal of fans. He loves my writing and his critiques are incisive and sometimes painful. But that' as it should be. A writer needs to hear about failures from someone who is supportive. A book circle such as this one, dedicated to the work of a single author, is a special vehicle for the writer's work.

Bear's loyalty is demonstrated in his absolute devotion to his sex partner, a stuffed dog named Samantha. Here it is, almost a year since his nuts were cut off, and Bear still humps Samantha two or three times a week. He has no shame in these public displays. He does a little dance around Samantha. He jumps up and forward in a canine declaration of love and dominance. It's a complex movement.

His hind legs make a motion as if he is kicking dirt backwards into the faces of rivals. Bear raises the front of his body to a forty five degree angle. This is accompanied by a simultaneous hop forward of a few inches. It resembles the movement of a big mountain ram smacking the horns of another big mountain ram.This dance is done in a circle around Samantha before Bear begins the serious humping. Maybe he 's an Aries.

"Ufff ruff," he says. In other words, "dig me, I'm Da Man!" Samantha lays on her side. She's a toy, she's inanimate. It doesn't matter to Bear. When he was just a puppy he had his first girlfriend, a brown stuffed dog named Greta. Somewhere between Greta and Samantha, and before we had Bear's nuts chopped off, we mated Bear with a living toy poodle named Snickers. That's a story I plan to tell very soon. The union produced another member of my Book Circle. This is Gabriel Kuruk (pronounced koo-roook).

Gabe is a dog of mischief. He was the runt in a litter of two. His sister Kiani is about the size of Snickers. Gabe barely weighs three pounds. Bear is a hefty hunk of muscle tipping the scales at seven pounds. Undaunted by his smallness, Gabe is fearless and clever. As a critic of literature he's a joker and is apt to make snide comments about my Philip Roth-style stories of Jewish life in the suburban sixties. Still, it takes all kinds to make a dynamic Book Circle.

We know that Gabe prefers comic books. We also know that he's not stupid. He takes his time learning things like "shake hands" but once he's mastered a skill he takes it to breathtaking extremes. Gabe shakes hands with everyone and everything. At four in the morning Gabe is shaking hands with the back of my shoulder.  Or he's shaking hands with Fox's big toe.  He is so thrilled with his mastery that he can't  help
but proclaim to the world, again and again, "I'm shaking hands!  I'm shaking hands!" It would be easy to understimate Gabriel's wit and cleverness.  As I have said, he ain't stupid. He usually gets what he wants.  If Bear has a chewy that Gabe wants, the chewy is Gabe's before too long. His tactic is to bore bear into giving up the chewy.  "Gimme chewy, gimme chewy, gimme chewy," Gabe repeats.  Three are fifteen chewies scattered about the place, but the chewy Gabe wants is Bear's chewy. At length, Bear sighs and lets go of the chewy.  Gabe does a triumphant set of insane laps, up and down the length of the RV. His paws make a sound like distant machine gun fire.

Bear always knows which end of Samantha is the business end. Gabe doesn't care. He messes with Samantha just to piss on his father's head. So to speak. On our walks with the double leash it's Bear who usually pisses on Gabe's head. It only seems fair that Gabe will take any approach to Samantha: head first, hind end forward, I don't think he really knows the difference. It's not like he's practicing for anything. He lost his nuts the same day Bear did.

The practice of stuffed doll polyandry seems to have done little damage to the father-son bond. They may tease one another, but they remain close.


(More tomorrow about the Animal Companion Book Circle, sharing the works of
the world's most talented obscure writer, Art Rosch.)
at December 05, 2010