My wife and I have virtually identical taste in TV and films.  If we've rented a stinker, we'll both know it within a few minutes. We don't have to talk about it.  Usually Fox allows me to state the obvious.  "This pretty much sucks, doesn't it?"  She'll agree and we'll move on to another DVD.
We're fans of Sherlock Holmes.  Fox had never seen the Jeremy Brett episodes from BBC, so I ordered all of them and we addictively rolled through the classic Conan Doyle stories.  We enjoyed every minute of the Brett/ Hardwicke team of Sherlock and Watson.  Brett was electric.  His gestures were superb.  We couldn't take our eyes off his lanky, asexual figure as he paced the cluttered rooms on Baker Street.  Edward Hardwicke's Watson kept matters somewhere near Earth.  With his face buried in the pages of The Times, he maintained patient vigil over his eccentric friend.  In the background, a sprightly Mrs. Hudson kept the gentlemen fed and reasonably presentable.
The 80's versions of Sherlock Holmes with Brett and Hardwick updated and overshadowed the  40's renditions that starred Basil Rathbone and Nigel Bruce.  I didn't care for them, and I was especially galled at the portrayal of  Watson as a bumbling clown.
"Quckly, Watson!", commanded Rathbone, "The game is afoot!".
Portly Nigel Bruce as Watson would struggle from his easy chair. "Well, er..ahem..." he dithered, "if you say so, Holmes.  I don't know the point of all this hurly burly...brhem, brhem...wait till I get my umbrella."
Times change.  Cinematic styles change.  Interpretations of classic popular stories change.
Sherlock Holmes has been played by fifty four actors in English language film or TV productions.  Every couple of years there seems to be a new version with new actors and directors, new special effects and new approaches to the scripts.

Robert Downey and Jude Law played Holmes and Watson in the 2009 film "Sherlock Holmes."  I've forgotten the film but I remember enjoying it.  Downey and Law turned it into a buddy movie.  There were tons of special effects, explosions and acrobatic tricks.  The plot was strong enough to hold our attention. The film resembled a Jackie Chan flick with a huge budget and box office superstars.  The dialogue was cheeky.  The movie was fun.
In 2010 the BBC produced a revisioning of the Sherlock Holmes myth.  Titled "Sherlock", the TV episodes star Benedict Cumberbatch and Martin Freeman as Holmes and Watson.  These are references to the old stories built on a contemporary framework.  Holmes and Watson are now pitted against Professor Moriarty in the age of the internet.  The scripting has shifted forward in time and technology has became intrinsic to the plots. "The Hound Of The Baskervilles" involves biological warfare labs.  Holmes must of necessity be a superb hacker as well as a genius in the art of deductive reasoning.
These episodes break the mold.  Benedict Cumberbatch has so much charisma that he can loan bricks of it to his fellow actors if need be.  As Holmes he stands outside the run of ordinary men.  He's hurtfully abrasive, ruthlessly honest, an out-of-control manic-depressive.  He has a bottomless appetite for intellectual stimulation and a pathological terror of boredom.  Common courtesy is alien to his character.  If he weren't Sherlock Holmes he would be just another irritating jerk.  Lucky for Sherlock, Doctor Watson runs interference for him in the world of normal human beings.  He writes the Sherlock Holmes blog, which has many thousands of fans.  He's the offensive lineman to Holmes' quarterback. The chemistry between Cumberbatch and Freeman is beautifully realized.  Freeman's Watson understands that, in spite of everyone else's opinion, Holmes is not a sociopath.  On the contrary, Watson knows that Holmes is a vulnerable man who can't afford to leak the slightest touch of sentimentality. Watson respects Holmes' privacy.  He doesn't need to know the reasons behind Holmes' impenetrable armor.  They exist and Watson has the wisdom not to pry.  It is an unconditional love that Watson has for a  compelling but very unlovable character.

Cumberbatch has an eerily feminine physical beauty.  As Holmes, his combined grace and arrogance are contrasted with Freeman's short, blockish Watson, the military surgeon wounded in Afghanistan.  Watson is brave yet unpretentious.  He's loyal and smart but has no need to compete with his friend Sherlock.  He leaves the competition to Professor Moriarty, who is played with terrifying gooeyness by Andrew Scott.  This is the scariest Moriarty, if not the scariest VILLAIN I have seen anywhere.  He mocks like a grade school bully with an I.Q. of 200.  He sings, dances, throws kisses off his fingertips in utter contempt as he pulls off world-changing, brutal crimes. The moral and intellectual duel between Sherlock and Moriarty propel these stories to a precipice of suspense.
It is Moriarty's contention that he and Sherlock are the same, that they work for the same overlord and are made of the same stuff.  Sherlock is an easy target because he is so horrible to friend and stranger alike.  Cumberbatch's Sherlock struggles with this question.  Who is he?  Angel, devil, scum or prince?  The entire series works through this ultimate dilemma until the shocking ending of Season Two.
The suspense keeps us hooked.  This is a fresh interpretation of a pop culture workhorse. The Sherlock Holmes franchise has been so overcooked that it would seem to be dried out.  BBC's "Sherlock" has infused it with new vitality.
This brings us to the second Robert Downey/Jude Law film, "Sherlock Holmes: A Game Of Shadows."
I had said something to my wife about how much I looked forward to this film. "This ought to be good, the first one was a lot of fun." For some reason Fox thought I had invested some feeling into this film.  Yes, I had enjoyed the first pairing of Downey and Law.  I have high respect for both actors.  I suppose I could call myself a Robert Downey fan.  He's weathered his personal horrors.  He's alive, he's working, his films are good.  Even his comic book films are good.  "Iron Man" was great fun. 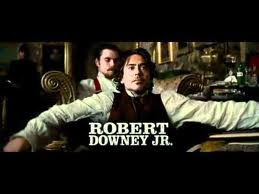 Jude Law won me over in "Cold Mountain."  He's been a high caliber super star and he hasn't made too many mis-steps in a profession fraught with all the pitfalls of grandiosity, wealth and fame.  Show business can turn the most grounded personalities into self-caricatures.  Hollywood has a tendency to tear up actors and turn them into absurdities.
Okay, okay.  The film starts.  I note that Downey's accent is somewhere west of Portsmouth....say....mid-Atlantic.  Not good.  Why is Robert Downey, THE Robert Downey, struggling to deliver a sufficiently plummy English accent?  This is Sherlock Holmes, for goodness sake.  He must speak in the most precise upper class  British accent.  Downey's accent is mush.  Either he's phoning it in, or he just flat out doesn't care.  Er...those are both the same thing, aren't they?
The dialogue is flat as a homeless recycler's Fanta can.  The action is nonsensical and non-stop.  There is no story to move forward.  There is frantic speedy zooming around, with Downey showing up in deliberately unconvincing costumes.  His fake Chinaman's whiskers are coming unglued.  His bald-cap is obvious as a giant latex condom, wrinkling at the back of his head.  The Moriarty character is about as scary as a pink marshmallow bunny in a wicker basket.
Fox and I watched.  We emitted mirthless laughter at the stunts and the strained dialogue.  Fox didn't want to say anything.  She thought I was enjoying the film.  I thought she was enjoying the film.
Our usual telepathy had broken down.  I thought it was a terrible movie.  I began to have the creeping sensation that Fox was being polite.  A half hour passed and I finally said, "This is incredibly boring, isn't it?"
Fox sighed with relief.  Time to bail on this mess and watch some quality BBC mystery.
This is a capsule history of the evolution (and sometimes devolution) of the Sherlock Holmes ouevre.  When it's bad, it's very bad.  When it's good, it's superb.
The major point in this analysis is that one can watch Sherlock Holmes productions from several eras.  As they move forward in time they reflect deeper psychological awareness.  At present the culmination of Holmes stories are the new Benedict Cumberbatch/Martin Freeman productions.  In these stories the Watson/Holmes relationship is nuanced and profound.  They are products of our times and our expanding psychological curiosity.  They are full of subtext, and that subtext is about love and sacrifice.  These may not be the Sherlock Holmes stories as written by Arthur Conan Doyle but they are faithful to the intent.  Doyle created a character who was a misanthropic genius, a towering intellect who saw himself as beyond the common lot of mankind.  The original Holmes was, however, a hero.  The modern Holmes is not quite sure what he is and is uncomfortable with simplistic labels like hero and villain.
This places the new Holmes in our modern reality where labels don't fit,
where people no longer see themselves in such easy categories.  Cumberbatch, Freeman and the cast and producers of the new BBC series are on their journey with their audience.  We are all trying to revision ourselves as new kinds of people.
Good TV and film are entertaining.  Great TV and film not only entertain but stimulate insight and are perhaps even inspiring.  The latest BBC version, "Sherlock", provides all of these qualities.