This is the only children's story I've written.  I hope my wife can do the illustrations.  Meanwhile I have a few photos of our own cats with which to liven the tale. 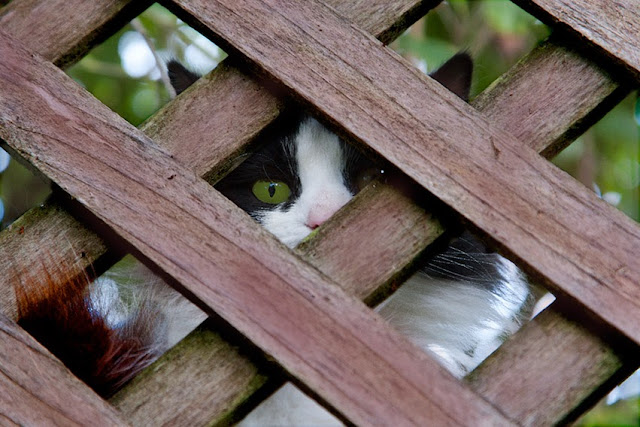 "Wow!  What a big cat!".
That was David's first thought as he looked at the animal that had jumped his fence and landed in his yard.
David wanted all creatures to have good homes and plenty of food.  People in his neighborhood called him "Mister Zoo" because he adopted so many animals. He had six cats, four dogs, a parrot, a guinea pig and a pony.  They all lived in the house except for the pony, who slept under an awning in a fenced patch of grass.  The pony was only about the size of a little boy and spent the day wandering around with the other animals.
David watched the cat quietly.  The animal was sitting like a king in his garden.  He had long black and white fur.  His ears were torn from fights and there was a scar on his nose.  His fur was matted with mud and was full of sharp sticky little leaves and twigs.  His paws were so big that David already had a name for him.  He was Paws!
David knew that trouble was coming.  The wind changed direction.  It carried the smell of a strange animal.  Six cats, four dogs, a guinea pig, a parrot and a pony caught the smell of the new cat.  Their heads turned at the same time, eyes and noses searching for the stranger in their garden.  They saw him, sitting calmly in the middle of a patch of red flowers.
It was as if someone had blown a whistle to start a race.  Tweet!  All of David's animals went zooming across the yard at top speed, barking, flapping, neighing and hissing.  Attack attack!  A stranger is in our midst!  Drive him away!
That's how animals treat strangers.  Animals think about food a lot, and strangers might eat their food.  So their first idea is to chase away new animals.
Paws didn't run away.  The animals came to a sudden stop in a circle around the new cat.  Wait a minute!  What's going on here?  This cat should be running for his life.  Instead he's standing straight and tall and telling everyone, " You don't want to mess with me.  I'm a pretty tough cat."
Sniff sniff.  Sniff sniff.  The animals circled the stranger, sniffing his nose, sniffing his toes, sniffing his ears and sniffing his other parts.  Paws sniffed back.  In animal language this sniffing is like seeing a movie or reading a book.  The sniffing says everything.  After sniffing, animals aren't strangers any more.  They decide by sniffing who's going to be their friend.
This time David's animals decided that Paws was going to be a friend.  They  turned and walked towards the back porch, escorting Paws like a super hero.  They let him go up the steps first. The food and water dishes were on the porch.  The pony waited for everyone else to get up the steps and then he followed.  His hooves made sounds like drum beats on the wooden deck.
Paws was hungry and thirsty.  The animals stood back while the cat drank a long drink, his tongue going "flup flup flup flup."  Then he ate all the kibble in one of the dishes.
He was a big cat and he was really hungry!
David went into the house.  The animals followed.  Even the horse went into the house.
David had never seen anything like this, never seen his animals make friends so quickly.  They not only accepted the cat: they made him their leader, just like that!
Paws rubbed against David's legs with his tail going swish swish swish swish.  David got onto the floor and gave Paws a scratch on the ears  The cat rolled onto his back while his tail went swish swish swish swish.  David scratched his tummy and the cat's eyes were half closed with happiness.
One thing was strange to David.  Paws didn't purr.  David  could tell if animals were sad or lonely.  He could tell if they had made a great journey across mountains and deserts.  Paws was one of those cats who had traveled a long way.  Today he had found a new home!  He should be happy.
But he didn't purr.  That was strange.  Happy cats purr.  Don't they? 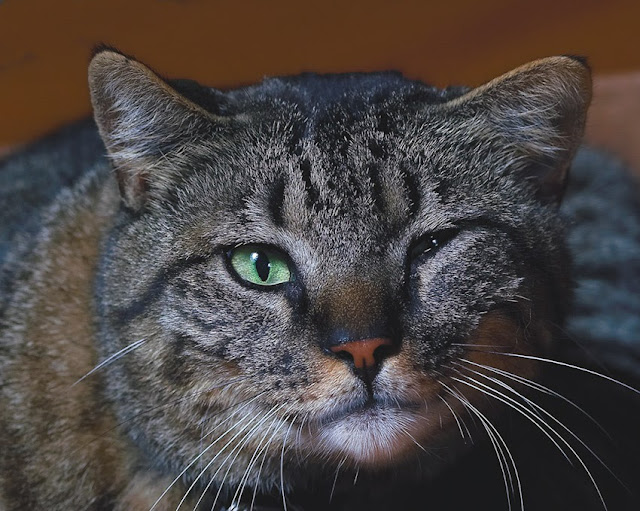 David was tired from working in the garden all morning.  He went into his living room and sat on his big soft chair.  He was surprised when Paws jumped right onto his lap and looked straight into his eyes.
"I wonder," thought David, "what stories this cat would tell me if only he could talk."
It seemed as if the cat heard his mind.  He's trying to tell me his story, David realized.  Paws opened his mouth and said softly, "Yow?.  Myow?"  His voice was gentle, almost too quiet to hear.  It was a sweet voice for such a big tough looking cat.
I wish, thought David, that I could speak the language of animals.  They could teach me so many things!
David stared into Paws' eyes.  As Paws said, "Myow?", a light slowly came from his eyes, a golden light that floated like a cloud around David's head.  The cloud became so thick that David couldn't see his house any more.  Instead, he saw people and places, he saw summer and winter, he saw deserts with cactus and high snowy mountains.  He saw good people and bad people.  Then David heard Paws' voice.  Inside the golden cloud, the  cat was speaking to him in a new kind of language, and he understood!  There were words in this language but there were also pictures and feelings.
"I remember," the cat said, "I remember the first time I opened my eyes.  I was being fed by my mother.  My sister and two brothers and I were drinking milk
and purring.  All I knew of life was a giant purr, the sweet taste of milk and the sound of my mother's heart beating.
Mother had given us our names.  These are special cat names that a mother gives to her kittens when they're born.  There is no way to say them in human language.  I may have many names in my life but nothing is more important to me than my first name, the name my mother gave me when I was born.
As I got older, huge hands picked me up and held me in a warm place where there was a giant heart beat.  My mother told me that these were the family that we lived with.  They gave us names, too.  They called my mother Violet.  They called my sister Fanny, and my brothers, Manny and Lanny. 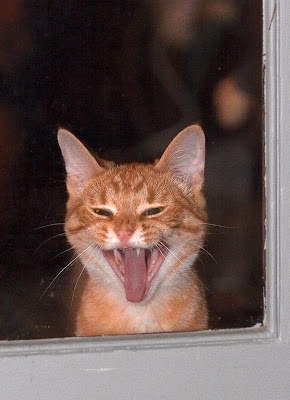 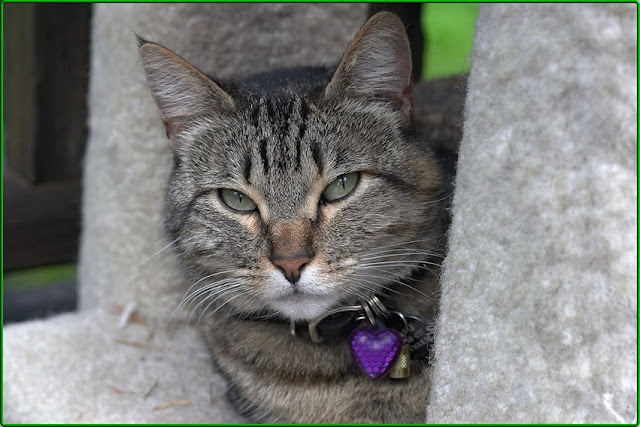 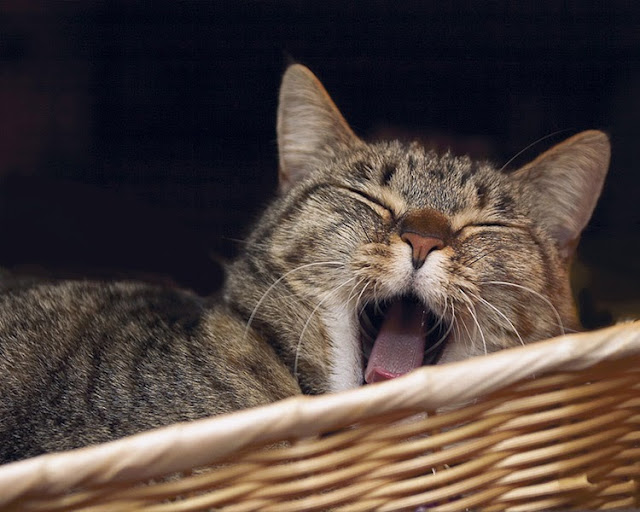 "You're doing a great job, buddy, a great job." Duke was sarcastic.
"Sometimes good things take time," I told my friend.  "You know that.
You've said it to me many times.  If something is worth having, you keep working.  You don't get angry or sad, you focus on your task and you keep working."
"You're right,"Duke apologized.  "I'm just sitting here watching while you do all the work."
The next day I jumped on the fence.  The animals looked at me and then ignored me.  They had gotten bored with my routine.  So I took the next step.  I jumped down from the fence and landed in the yard, in the middle of a patch of red poppies.
This was too much.  The animals had to do their duty.  They charged at me but this time I didn't run.  I wanted to run.  My fear was saying, "I'm scared, hide!  I'm scared, hide!"
I told my fear voice to be quiet.  I didn't run.  The animals stopped and looked at me with questions in their eyes.
"Who are you?" they asked.
"My first name is the name my mother gave me," I told the animals.  I said the name and the cats understood it because it's a special cat name that only cats can pronounce.
"My second name is the name given to me by my birth family, which is Claude.  That's the name I use most of the time.  I have another name which I never use.  That name is 'Useless'.  I've also been called 'Heycat, Purrless Wonder, Getouttahereyoupest,' and all sorts of names."
The cats told me their cat names and their first family names and the names they used with the man.  They told me the man's name was David.
The dogs had only one name apiece.  The bird had twenty names and the horse didn't know its name but it thought it might be  'Giddyup' or 'Come On Let's Go'."
I learned with great relief that none of the cats were mousers.  I called to Duke.  He was just outside the fence.  He crawled under and came towards us.  I could tell he was nervous.  He got up on my back where he usually rode and clutched tightly at my fur.
Introductions were made all around.  "By the way," said the cat named Isadore, " we know a lot of nice lady mice around here.  You should feel right at home."
Duke and I and David's animals made a plan.  Then we went to our positions and waited for David to appear.  After a while, he came from his house and walked toward the garden.  I sat calmly in the poppy patch while the animals put on a great show of trying to chase me away.  As I had hoped, David was amazed.  He approached me and bent to scratch my ears.  My tail went swish swish swish.
"I've already got a name for you," he said.  "I'll call you Paws."
It sounded good to me.  What's one more name?
David turned to go back to the house.  All the animals followed.  Duke stayed hidden in my fur.
David sat in a big chair and I jumped right up on his lap and looked straight into his eyes.  Then something happened.  The light in David's eyes jumped out and met the light in my eyes.  In that moment, somehow, David learned to speak Everything Language.  We could understand each other.
David had been thinking, "I wonder what stories this cat would tell me if only he could talk."
I had always been able to talk in Everything Language.  Now that David could understand,  I told him my whole story.  When it was over, David asked me politely, "If you're starting a new life, maybe you should have a new name.  Do you mind if we call you Paws from now on?"
"Yow, myow," I said.  "I don't mind."
A little wrinkled nose came from the fur behind my ears.
"You must be Duke, Paws' best friend," David said.  "You've been brave, loyal and wise.  Welcome.  Welcome Duke and Paws.  Welcome to your new home.  This will be your home forever."
"Thank you," said Duke.  "But I don't want a new name.  Is that okay?"
"I don't make people do things," said David, " that they don't want to do."
My tail and Duke's tail went swish swish swish at the same time.
"This is my kind of place," said Duke.  "A place where I can be free."