Excerpt From "Green Highway: Living A Good Life In A Changing America" 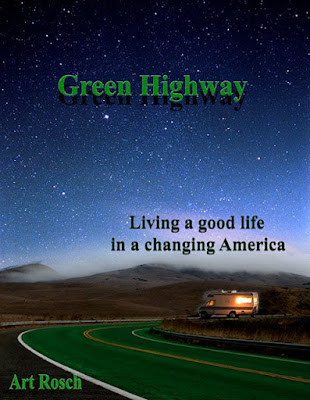 “How could you be so stupid?”

I was talking aloud to myself, as I looked out over the mesa.  A hot wind was blowing bits of sand and dust into my eyes.  I squinted and raised my hands to protect my face.

Suddenly the words thrust me back into memory, some thirty plus years,

to a time when my dad had said those same words to me.  In all my childhood, my father had seldom spoken harshly, so there was reason for the memory to be prominent.

I had been granted use of dad’s Chrysler on a Friday night, for three hours.  When I arrived home, fifty six hours later, I probably gave the impression that my eyes were spinning in different directions. The car was fine, but I was pretty bent.

My dad, normally a calm man, was disappointed, frightened and furious.  He asked me what I had been doing for the last two and a half days.  Rather than be honest, I shrugged and used a sulky whine reserved for adolescent males.

“Uhhh, I don’t know,” I said, fidgeting and not meeting his eyes. “Guess I just lost track of time.”

Ordinarily, when in trouble, I could improvise convincing deceptions. I knew this was pretty weak, but I had no idea how to confess to my dad that psychotropic drugs were involved, and that my friend and I had just finished burying a bust of Beethoven in his mother’s rose garden.  We had spent a prolonged LSD weekend in his parents’ big empty house.  All through the night, whenever we gazed at the the composer’s frowning lips and fiery eyes we felt scolded, accused.  The bust of Beethoven looked completely and convincingly alive.  He was making it impossible for us to enjoy ourselves.

“What’s wrong with you, Ludwig?” I implored, several times.  “Will you cut it out? You look really pissed off.”  He replied in German, which was just as well.  Finally, we dug a hole, took the bust off the mantelpiece and put Beethoven under two feet of fertilizer.  After that, we felt much better.

“Don’t tell me you don’t know,” dad riposted.  “You KNOW… you just can’t tell me without making yourself look like a fool.” He was pretty right about that. It was the mid sixties and my dad was up to date on things. Without having to be told in explicit detail, just by inspecting me closely, he surmised what I had been doing and said, simply, “How could you be so stupid?”

The words hurt.  I wanted my father’s respect.  I knew he was right.

I was sixteen then, fifty two years old now, and I was as disappointed with myself as my father had been with me all those years ago.

And, again, I answered weakly.

“I just didn’t know,” I replied to this dad-voice of memory, “I didn’t think it through, I thought it would be easy. I thought we could do this, one- two- three.”

The “thing” that I thought we could do, one- two- three, was go camping in Utah in the middle of July.  The temperature was well over a hundred, there wasn’t a spot of shade, we were isolated and in trouble.

Okay, I was stupid.  I had led myself, and my wife, down a certain famous creek without a method of propulsion.

We were absolutely the worst campers in the world. We were camping at the wrong time, in the wrong place, with the wrong equipment.  We were dog sick. Our heads were aching, our joints felt like someone had poured hot glue into every ligament.

Aside from the suffocating heat, we were at nine thousand feet

We had arrived late the previous afternoon.  We had set up our tent in the middle of the slick-rock desert near Moab, Utah.  We had eaten, and watched the sun set over the buttes, the rocks and the vast sandy wastes.  Then we reveled in the beautiful star-lit night.  We had done it, we had arrived!

By ten the next morning we were completely miserable.

We had driven from the west coast, pushing hard across Nevada, traversing Utah’s Great Basin. We traveled on a mix of coffee and adrenaline, eating hideous truck stop food.  Our car’s air conditioner insulated us from the desert reality outside.  We had no clue what awaited us.

Then it hit us like a hammer. Heat  exhaustion, altitude, bad food, long hours of driving.  It was a deadly combination.

At that moment we felt helpless.  Outside the tent, there was choking dust, a torrid wind, and smoke from Colorado forest fires.  Add to these miseries the existence of  ten billion tiny white gnats, enough to get into every crack and orifice. We had arrived during some kind of hatching phenomenon. The bugs were frenzied with pheromones, they gathered in great opaque clouds, which drifted towards our tent until we were lost in a storm of little white insects.

The next day they would abruptly disappear.

It was probably a hundred twenty inside the tent. Occasionally, I would stick my head outside, and find it even worse;  the sun made me so dizzy I couldn’t stand up. I prayed for a cool breeze, something, anything to change this sense of stifling malady. I didn’t have the strength to be outside, nor did I have the strength to endure being inside. Fox and I dragged our sleeping mats to the tent’s door and lay there, half in, half out, turning ourselves every now and then to alternate head and feet.

She was the color of an old bedsheet.  She was serious.

“Do you want me to do something?  An emergency room?”

Fox thinks she’s going to die seven or eight times a year.  I knew she would refuse.  She has a major phobia of doctors. She would rather die than be in the presence of doctors.

She got to her knees suddenly, lurched out of the tent in time to

I pressed my palms to my forehead, hopelessly trying to rub out the headache that sat like an anvil atop my skull.

At the time, I blamed part of our dillemma on age, as if camping were limited to young people. I was FEELING old, I was in shock from the transition that was taking place in my body. The end of my youth had come hard.  I seemed to have gone from young to ancient without stopping off at middle age.

I was fifty two, Fox was forty eight and it was July in the desert. We were dumb rookies, not hardened adventurers.  I hadn’t been in a tent since Boy Scout camp.  If an eleven year old boy had come along, he would have rolled his eyes and sneered at me with contempt.

Why were we killing ourselves with this poorly planned trip?

Fox had compelling reasons for wanting to see the area of The Four Corners.   A few months previously, she had discovered, completely out of the blue,  that she was half Apache.

Give this a moment to sink in.

She had believed her entire life that she was the child of Swedish parents.  Then, on a trip back to the old Iowa homestead, in a conversation with eighty year old Aunt Inge, she learned that she was the illegitimate child of her father and an Apache farm worker named Morning Star.

Fox had memories of Morning Star.  Fox had, as a child, adored Morning Star, but it wasn’t until forty odd years later that the puzzle came together with the force of an earthquake: Morning Star was her mother!

When the shock wore off, it explained so much to Fox.   It made sense of the way she looked.  She had black hair whose strands were thick as cables.  Her cheekbones gave her a proud, angular look.  She was slow to anger, but when her ire was roused she became like a turbine of formidable rage.  She held grudges for years.  She could be ruthlessly unforgiving towards those who perpetrated injustice.  Yet, being deeply Christian, she longed to forgive.  She felt ashamed at her lack of charity, she felt as though her anger were sinful. She was always battling with these internal forces.  She had been raised in a Christian home, but she felt something wild and vengeful in her heart.  In particular, a blind rage could possess her when she saw someone mistreat an animal.  She could charge into a situation with fury, chastising a farmer for whipping a horse or prodding a cow. Needless to say, she was considered odd.

She had a spooky ability to speak with animals. She was called an “ear”, what is now called a “whisperer” or, in some circles,  a “Pet Psychic.”  She had a penchant for bones, stones, leather, feathers. She wandered the plains alone, hunting for arrowheads, sage, abandoned birds’ nests.  She gathered her findings into little packages, over which she made “magic”.

The discovery of her true lineage explained her feeling of not belonging to the family.  It explained her sense of being plunked down in the wrong birth zone, as if the baskets had gotten mixed up by the stork.  She understood, at last, why she had spent her life wondering why she was not like her sister, mother, cousins, all these fair and freckled people who said “Yah, shooor.”

Fox’s father was a serious and respected man, not a philanderer. He had fallen in love. The child of this love was taken to the family, no more was said until after mom and pop and most of the family were gone.  Aunt Inge held the story forty eight years, waiting for the right time.  Fox was Apache from the Chiricahua Band, a descendent of those famous warriors who led the U.S. Army on endless wild chases through the canyons of the Southwest.