The Sons Of Anarchy: The Sopranos on Harleys, a review 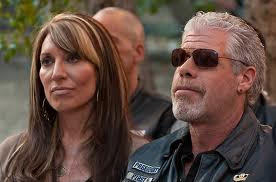 I must ask myself this question: How in HELL did the writers of this show get me rooting for an outlaw gang of bikers?  These ruthless criminals make a living selling AK47s to Oakland heroin dealers.  Their idea of a good time is to drink, eat and fuck until they pass out on the spot. They settle disputes by beating or killing their enemies in gruesome ways.  Their ethos is reminiscent of "Omuerta", the code of La Cosa Nostra, aka the mafia.
One way they do it is to make the avatars of Law and Order look even worse.  The ATF, the FBI  and other Fed-types are smarmy vindictive little creeps wearing suits and ties.  Female ATF agent Stahl (played to a nasty pinpoint by Ally Walker), is working entirely in her own interest, shorn of ideals, motivated by greed for power and whipsawing one side against the other against the other (because this isn't simply black against white, this is all colors against all colors).  She allies herself with gangs when it suits her, betrays those allies in a heartbeat, and goes for the throat of her enemy like a Rottweiler taking down an intruder in a used auto parts lot.  She's so scary/creepy that the audience cheers when manacled convict Otto Delaney smashes her head into the prison's visiting room table.  Anyway, I did. 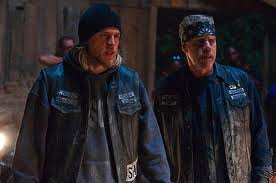 Getting anything over on this too-smart bitch is a triumph.  Flattening her face in front of the guards on surveillance TV is a moment of profound emotional release.  We have been hating Agent Stahl so hard that nothing is too awful for her.  Fortunately for the continuing drama, we will be dealing with Agent Stahl for some time to come.
So, that's one way the writers get us rooting for these Hog-straddling werewolves.  The American psyche is loaded with  anti-authoritarian sentiment. It may at the present moment be latent or sadly corrupted, but it 's still there. Sons of Anarchy writers are fully aware of the allure of outlaw glamour.  When they include intense family loyalty and an unflinching code of Cycle Club solidarity, it tugs at our hearts and we want these guys to win.

What are they going to win?  Let's see what prizes are on offer.  Pull back the curtain, Ralph, and show the studio audience what our contestants might go home with!  First there is complete domination of the thriving unspoiled town of Charming, California.  Charming is Old School.  The bikers have held  developers at bay,  kept the town clear of malls, chain stores and corporate boogeymen for more than a generation.  While the rest of California oozes down the plastic fantastic drain, the town of Charming enjoys corruption the old fashioned way, the way it's supposed to be, where everyone watches everyone else's back, so long as the nasty stuff stays beyond the town's borders.  Police Chief Wayne Unser is dying of cancer.   He's got six months to live.  When he dies it will be Deputy Hale, the town's Captain America, who threatens to shut down all the fun and games.  Chief Unser  owns a trucking company.  Very handy for shipping guns and other hardware to Lodi, Oakland, San Bernardino and points beyond..
As we watch the episodes unfold, a few interesting things happen.  Our sympathies shift.  People we thought were disgusting turn out to be brave and soulful.  Both Chief Unser and Deputy Hale show themselves in greater complexity. Hale starts out as a naive idealist.  When he's exposed to the vindictive Agent Stahl, when he sees that the so-called legitimate interests are worse than the Sons of Anarchy he grows more flexible.  As this happens he also grows more likeable.
Chief Unser's blatant corruption is built on self interest, but it's also founded upon an abiding affection for the people in the motorcycle club.  His friendship for club matriarch Gemma Morrow is one of the most endearing themes of the show.  As Unser faces death and Gemma faces terrors only a mother could know, they support one another in a way that shows true devotion.
Who is not moved by true devotion?  It's all too rare in real life; in Sons of Anarchy it's one of the themes that holds the drama together.  The motorcycle club has a history; it has traditions.  Fathers pass membership to their sons.  The Sons of Anarchy Motorcyle Club Redwood Originals, or SAMCRO as they are called, is a family, a community, a clan, a democracy.  And they love babies.

Ron Perlman plays the club's President, Clay Morrow.  Hey, it's Ron Perlman.  What should I say about him?  He's Hellboy.  He's a face of nature. He's an old gnarly tree come to life.  He doesn't have to act.  He merely has to BE.
Katy Sagal plays Gemma Morrow, Clay's wife.  She is the clan's First Lady. It's Gemma who occupies the fulcrum character position in this series.  She won the Golden Globe for her acting.  She inhabits this role as if it IS her own life, and in some profound way, it must be.  She's married (in so called real life) to series creator Kurt Sutter.  Katy's husband also plays blinded con Otto Delaney.  So this really is a family enterprise.  The show's creator is married to one of the show's stars. The show's star provides her voice and songs to the soundtrack.
Katy Sagal's character Gemma calls herself "a fierce mother".  She's in touch with the archetype, with the protective implacability of motherhood.  She looks at people as if she is looking down from a great height.  She is an Earthmother queen who looks at people from the lofty defense of her fortress's tower.
Watching The Sons Of Anarchy can induce a peculiar worldview.  Is everyone just part of a gang competing for power and dominance over other gangs? Is it always The Sons versus The Mayans, The Nomads versus The Aryan Brotherhood?  Is it neo-Nazi thugs going "respectable" to edge the Sons out of Charming?  Is it Black Oakland heroin dealers ripping off Latino gangs?  Is everything just one big knot of revenge unraveling strand by strand and then forming new knots with every killing?
In a word, YES.  That's the world.  Governments are nothing more than criminal enterprises serving the entities promise to maintain their power.  Didn't we once think we were better than this?  We did.  And we're not.
As Clay Morrow so acutely observes, "The most violent gang of all is Old White Money."
When Old White Money arrives in Charming it is in the form of Ethan Zobelle, played by smirking Adam Arkin.  He heads a shadowy organization of Neo-Nazis.  His thugs are well dressed, most of the swastika tattoos are hidden under their clothes.  They open a cigar store, a legit small business.  The store is the front from which to undermine and destroy the outlaw gang of motorcycle hoodlums.  When that's done, Charming can be opened up to land speculators and oodles of money can be made by REAL people with decent personal hygiene. 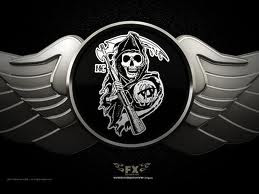 Zobelle's ideological commitment  is expedient.  When he needs to manipulate black or latino gangs he has no problem being respectful to their chieftains.
Adam Arkin's no great actor but he doesn't need to be.  The smirk does the work.
At the center of all this strike and counterstrike is the character of Jax Teller.  It was Jax's dad who founded the Sons of Anarchy.  John Teller was married to Gemma.  When he died in a strangely murky road accident in the 80's, he left Gemma and his toddler son with little more than a personal manuscript containing his philosophy of life and his vision for the future of the club.  Some time later, Gemma meets and marries Clay Morrow (Perlman). It's a good marriage.  Clay's a wily  strategist and an equal to Gemma.  He's willing to raise Jax as his own son.
Thus are laid the seeds for an old fashioned father-son conflict.

Charlie Hunnam plays the central role of Jax Teller.  It's a complex role, an actor's dream role.  It asks  him to be tender, vulnerable, fatherly (oh yes, he now has a newborn son), yet ready to beat the crap out of anyone who crosses him or his family.  He's ready to use his automatic pistol,  fire an AK47, swing chains, throw molotov cocktails, throttle other thugs with his hands...AND...be sweet, nurturing and compassionate.  He also woos his childhood sweetheart (who is now an MD returned to Charming for reasons too complex for this essay to explain).  Wow.  That's an actor's role!
Hunnam isn 't quite the actor to handle it.  In the first season  he was adequate to the extent that we didn't notice or even care that he was not in the same league with Perlman or Sagal.  In the second season I began to feel some irritation at Hunnam's portrayal.  By this time I had seen his repertoire of stock facial expressions.  His conviction seemed to fade.  He is supposed to be THE star of this series, but his second season's acting is tired.  I know, he's supposed to be banged up from his battles, beatings and busts.  It looks like he, the actor Charlie Hunnam, has had  his own extracurricular battles and that he brings the black eyes to work rather than letting Makeup apply them to his face.  Something isn't right.
That's one beef I have with the series.  In the Big Picture the series Sons Of Anarchy may not be in a league with Rescue Me.  It doesn't match that series' psychological insight or insanely charged hilarious dialogue.  Still, it's a damn good bit of television.  They have already produced Season Three and contracted for Season Four.  I haven't seen the third season.  It will be released to the public some time in August 2011.  I'll be willing to bet there are cast changes, crew changes and an overall veering of the narrative towards a new horizon.  I have faith in the people who make this show.  They're very good.  They've left us in a position that is absurdly fertile for plot development.  In other words, the heroic, despicable protagonists in the SAMCRO  organization have ample scope to destroy the town of Charming or have themselves wiped out by their many foes.
In short, they are in Deep Shit, and that's the best way to write a drama.