Galaxy's Light or The Earth Gets An Oil Change 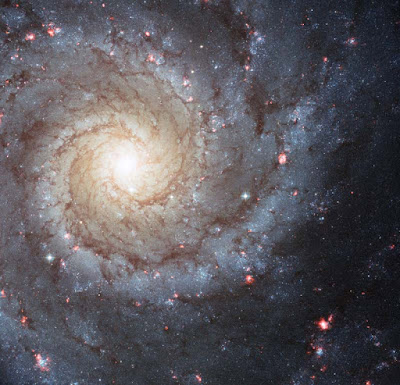 Think about this.  WHAT DOES THE SKY LOOK LIKE from a habitable planet near the center of the galaxy?

On earth we don’t even know there’s a night sky, we’ve so polluted the air with bright lights and smog.  But there are billions of other planets.  Odds are staggeringly in favor of there being intelligent species all over the universe.  Each of these sapient races will have its own sky, its own mythology, its own culture brought down the ages of their unique development.
Given a moderate world with ample water, there can be human-type beings whizzing around the central bulge, near enough, but not too near, the black hole that resides at the heart of nearly every spiral.
These races will have daylight, and they will have night light bright with stars, nebulae, clusters in such abundance that our imaginations must reel.
What if…what if what if what if…the farther away from the Center a planet resides, the more primitive are the sentient beings who live there?  I mean, what if?
I’m letting my mind drift into crazy ideas.  We earthlings live two thirds of the way out to the edge.  We see (when we see) a sky of great beauty but of relatively slight distinction on the scale of galactic possibilities.
To live near the center of the galaxy!  What a privilege!  What staggering beauty!
The black hole and its increasing crowd of stars whizzing faster and faster around its gravitational vortex would be a sphere of lethality, a lifeless zone of intense radiance.  It would the galactic no-fly zone, a sphere of quarantine.
There may be planets in this zone holding the ruins of ancient civilizations.  Their peoples may have emigrated, or even hurled themselves into the black hole as the ultimate act of service to the mystery of infinite gravity.
Stars move, stars travel around the galaxy.  It takes our sun approximately two hundred fifty million years to make one rotation of the Milky Way.  We know that our sun moves up and down relative to the galactic plane, describing a curve taking some thirty two million years each way.
Are we also moving towards the Center or away from it?  Astronomers calculate that the sun’s orbit relative to the Milky Way is an ellipse.  We are going both towards and away from the Center, depending upon the epoch we consider.
What if..what if the more evolved a planet’s creatures become, the closer it migrates towards the center?  We earthlings aren’t very advanced.  That much is obvious.  We just unplugged the whole planetary oil tank, whoops!  Do not trespass, authorized personnel only, danger, hazardous waste!!
It was too early for an oil change.  We had another hundred trillion miles to go.  If we are this moronic, what kind of people are WORSE than we are?  What if…what if farther out, towards the galaxy’s edge, live people who war and hate, cheat and plot, plunder on a scale we can’t imagine?!  Farther IN live people who have refined themselves beyond our eco-cidal addictions to toxic energy sources.
I’m just playing with ideas.  I’m not a helium-headed New Age nut case.
I’m not a believer.  I’m an inquirer.
Wouldn’t that be an interesting way to organize a galaxy’s spiritual hierarchy?  If there were such a thing…and why not?  What don’t we know?
What DO we know?
Very little.  We’re just frightened world-killers in a sea of stars.
at May 30, 2010