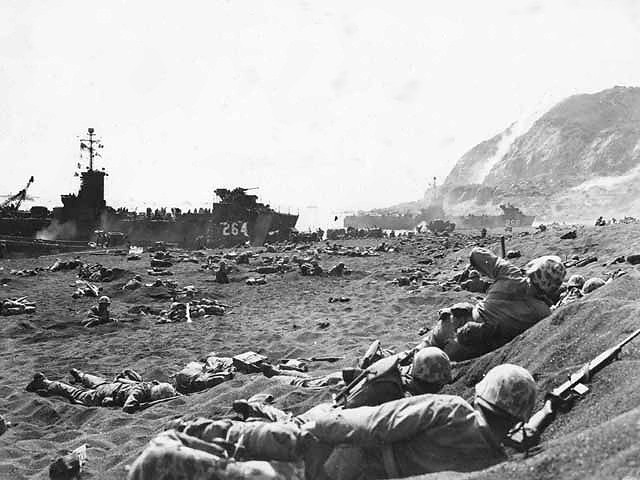 I was dead.  The last thing I heard was the vicious whine of a shell that hit the beach about ten yards to my left, between me and the empty Higgins boats floating like toys in the surf.   The black sand erupted and something ripped through my helmet and threw me forward onto my face.  For a while it was dark and quiet; it was a beautiful relief.  A minute ago I had been so scared that I was afraid I'd wet my pants, or worse.
Now it was over.  Just like that: boom!  Over.
It seemed like a long time, the sweet blessed dark.  It seemed like a year of rest and peace.  I fought my sense of returning awareness.  No!  I'm dead!  I know it!  Why would I want to return to Iwo Jima, why would I want to be anywhere near this unspeakable war?
First there was utter confusion as the light began to return.  Where was I?  What was happening?  Then I righted myself as if I had been thrown into a roaring surf.  I knew which way was up.  I knew which way I had to go.
My body lay with half its face buried in the sand.  I could see one eye.  It was still open but nothing moved.  The iris no longer reacted to the changing light.  The muscles were utterly still.  I felt a tearing and complete sorrow.  That used to be me!  And now, it’s…what is it?  It’s not me.  I won’t be living and moving inside those muscles and sinews, not any more.  A piece of shrapnel had sliced open the helmet and pierced the body’s skull.
I died fast, at least there was that.  One second I was a lieutenant in the  Marines.  The next, I was up here, above the beach, floating. 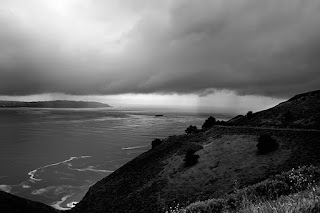 “Shit!” the corporal cursed.  Then he looked sheepish.  “Maybe I shouldn’t be cursing in this place…whatever this is…at least it’s goddam quiet.  Aw shit, I did it again.  Uh..Sir.”
I tapped him on the chest with my cottony hand.  “I don’t think you’ll be judged for a few curse words, corporal.”
Williams relaxed.  “Guess not.  Bigger things are happening, huh?”
“Yeah,” I said.  “Bigger things than a few curse words.”
The two of us sat together and spirits came to us.  I saw so many of my guys, far too many.  The battle was terrible.  Their spirits came in various conditions of confusion and denial.  I simply told the truth.  We were dead.  I didn’t know what would happen next, but it would be okay.
Time and space were elastic.  An hour passed in a second.  A minute passed in a month.  I found myself going from soldier to soldier.  I was being moved by a greater force, a force that used me as if I were a doctor making rounds.  It carried me to the place I was needed.
Colonel Waterford refused to believe he was dead.  I found his body covered by a tarp while his spirit raged at his junior officers.  “Get those men off the beach!  Where’s Kline?  He should have suppressed fire from that fucking mountain!”
None of his staff heard his voice.  It was driving him crazy.  He reached impulsively for the forty five strapped to his hip but his hand came up with a nebulous object, something that looked like a gun but was not a gun.  It slipped through his fingers and he scrabbled in the sand, cursing with frustration.
I approached and performed my best salute.  “Sir!” I said.  “Lieutenant Podolski
reporting with an urgent message.  Sir!”
"Well, what is it?" shouted the Colonel.
"Sir.  You are dead, sir. Killed In Action."  I showed him the body under the tarp.  He refused to accept the truth.  He looked around for an MP.  “Someone arrest this idiot!” he bellowed.
No one heard.  I began to see cracks in his composure.  He carefully smoothed them over and continued howling orders.  It took me a long time to settle him.  He couldn't accept the fact of his death.  He raged and complained.  “Who left that corpse here?”  He pointed to his own body.  “Somebody take it away for fuck’s sake!  It's beginning to stink.”
There was nothing more I could do.
When the spirits of the first Japanese soldiers began to drift into our expanding circle, many marines instinctively reached for weapons.  There were no weapons.  When they tried to fight with their hands, it was impossible to grip the cottony substance of the  enemy.  Next to me, the spirit of Corporal Williams said, “Aw fuck it.  Look at ‘em, sir.  They’re just kids, like our guys.  Just kids who got killed fighting for their country.  What a waste!”  He made a full turn, looking at whatever he saw.  I didn’t know if he saw what I saw, but his next statement endeared him to me forever.
“You know,” he said, “from this vantage point, war looks like the stupidest most moronic thing in the whole fuckin’ world.”
I noticed that in the sky above the huge amphitheatre of war there were hordes of spirits.  They were tumbling about, all in a confused mass.  They seemed to be trying to descend to the level of the beach.  They stopped one another.  Light spirits with wings of gold reached for the rising souls of the young soldiers.  Demons with black fangs tripped them, held them, obstructed them, wrestled with them. 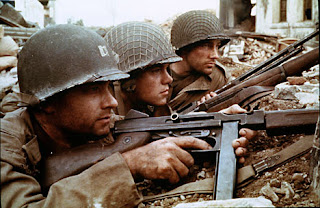 More and more soldiers came to join our mass of spirits.  Japanese and Americans sat quietly speaking.  Language was no impediment.  They understood one another.
It seemed like we were caught between two wars.  The angels and devils competed to get past one another.  I looked farther up and saw an orb of light that was brighter than a trillion suns.  It was burning with sweet ferocity, yet it did not blind or sear.  It was light and it caused everything to be what it was.  It took no sides.
One at a time, the spirits in the air passed through their own conflict and drifted down, to float near a soldier.  Many of the angelic spirits came.  Some of the devils came too, but not so many.  Each one chose a soldier.  The spirits extended their wings, or claws, and took the soldiers.  The angels lifted their charges towards the light.  Holes opened beneath the hooves of the demons and they carried their assigned souls down and down, into the earth's crust.  Gradually the pairs of spirits disappeared.  They faded away, vanishing over and through the bowl that was Iwo Jima.
The battle was ending.  Flame throwers were mopping up.  The bowl of the island grew transparent.  I could see inside Mount Suribachi with its many caves and tunnels.  Charred Japanese bodies lay stiffened in grotesque postures.  Blackened bones of clutching hands pushed into the air.  They would stay buried there forever.
It seemed as if only a few minutes had passed.  The shape of the island had been changing from that of a bowl to one of a flat plain.  It was an endless desert with but a few pebbles to mark off the distance to the horizon.  A ragged line of Japanese soldiers were huddled together, tiny, far away.  Near to me, a fortress stood, with walls that extended into the sky.  It was a monstrous battlement, with ten thousand flags waving.  It bristled with guns and spears, arrows and vats of boiling oil.
I knew what would happen.  I knew because it was as logical as fate.  There was no caprice, no irony to it.  Only a terrible dignity.  The Japanese stood proudly, waving their curved swords.  A man stood among them, taller, more proud, more dignified.  He was dressed like all the others except for his high boots and the open white shirt collar over his tunic.
He was the general, Kuribayashi.  He seemed to be miles away but I heard him speak.  His soldiers looked to him with great love and devotion.
He was talking to his men, though something more intimate in his diction told me he was speaking to his family, to his son.
“My life is but a lantern, glowing in the wind.”  Those were his last words.
Banzai!  The solders charged the huge fortress, waving their swords with great ferocity.  In response, the massive thing seemed to swallow deliberately and then spit a giant bomb.  This bomb struck the oncoming soldiers and vaporized them instantly.
The battle was over.  I was all but alone.  Here and there, I could see the living but they were becoming more tenuous as the ghosts became more real.  The spirits from the final charge were taken by a great Samurai ghost, a creature of impeccable composure.  It wore an elaborate helmet with antlers of carved ivory.  The General bowed to the Samurai spirit.  It bowed in return.  There was flash of light, as if the sun had gleamed on a sword blade.  The soldiers vanished.
I sat quietly.  The Great Light, that light as powerful as a trillion suns, the light that did not burn but healed, came closer.  It drew itself out of the heavens and approached.  As it did so there coalesced yet another form, another being.  It was dressed in ordinary civilian clothes.  It walked on the ground, coming forward until I could see it plainly.  I had an odd sense that I was looking at my own twin.  The being was so much like me, yet different in many ways.  It was both male and female.  It radiated such peace of countenance.  If I could chose to be anyone, I would chose to be this being who now put its arms around me.
“Samuel,” it said, “you’re ready.  You’ve done well.  It’s time to go.”
“Yes,” I said, “It’s time to go.”
I allowed the being to absorb me in its embrace.  I felt more complete than I had ever imagined it was possible to feel.  This being was myself and not myself.  It was something I could call soul, or spirit, or any of a myriad names.
It rose into the sky and carried me towards the light of a trillion suns. 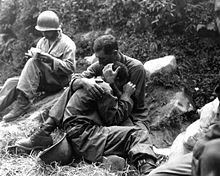